No Category So Dead, No Acting Race So Lifeless 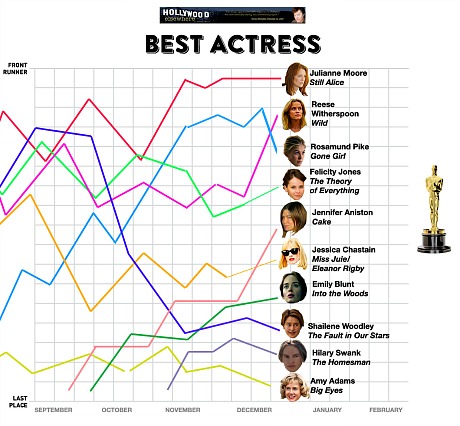 Except, of course, for the very likely fact that Moore is going to win. Can anyone think of another year and another acting race in which this has happened? A Hollywood scholar equates the 2014 Best Actress race to 1984 “when it was really weak…Sally Field won her second for Places In The Heart over Sissy Spacek for The River, Jessica Lange for Country, Vanessa Redgrave for The Bostonians and Judy Davis for A Passage To India. There was also 1966 when Oscar would only find one Hollywood-type nominee (and winner) — Elizabeth Taylor in Who’s Afraid of Virginia Woolf against four then little-known foreign entries: Lynn Redgrave in Georgy Girl, Vanessa Redgrave in Morgan, Anouk Aimee in A Man And A Woman and Ida Kaminska in The Shop On Main Street.”