I went to high school for two years in Wilton, Connecticut, and I visited there often over the next few years, and can say with at least some familiarity that Wilton was always a moderately conservative town. But I’ve always understood that the high school was a somewhat progressive institution. No longer, apparently. 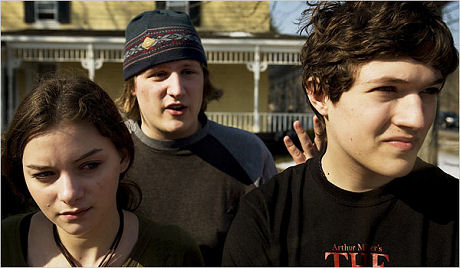 A planned April performance of a play about U.S. troops and the Iraqi War called “Voices in Conflict” was recently cancelled by principal Timothy H. Canty, due to “questions of political balance and context.” Translation: conservative voices in Wilton wanted it suppressed.

A N.Y. Times story by Alison Leigh Cowan says that Canty “has tangled with students before over free speech,” and that his justification for cancelling the play was concern that it “might hurt Wilton families ‘who had lost loved ones or who had individuals serving as we speak,” and that there was not enough classroom and rehearsal time to ensure it would provide ‘a legitimate instructional experience for our students.'”

In fact, the play has reportedly been blocked from appearing anywhere. It would be appalling if the play was never performed. It would be even more appalling if it ends up not being performed because the high school authors and actors don’t try hard enough to overcome or out-finagle the censors.