I’ve read Chris Nashawaty‘s Entertainment Weekly cover story (issue #927) on Grindhouse twice, and it seems curious that there’s not even a mention — not even a wisecrack — about the emotional upheaval that resulted from Planet Terror director Robert Rodriguez‘s indiscretion with costar Rose McGowan during shooting early last year, and his wife-producer, Elizabeth Avellan, finding out and freaking and then suing for divorce, and Rodriguez allegedly suffering some kind of emotional meltdown and the shoot being somewhat more difficult because of this. 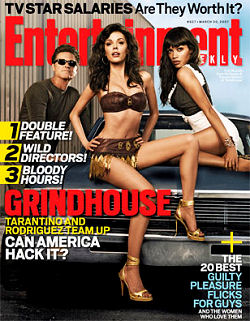 As this was reportedly seismic at the time (i.e., to judge from what Planet Terror crew people told other people), you would think it might rate a brief mention. (Can one discuss the making of Cleopatra without at least mentioning the Liz Taylor- Richard Burton affair?) EW isn’t People and what happened off-set (or in the trailers) doesn’t belong in any substantial way in Nashawaty’s story, but not even anecdotally? The omission seems like a chickenshit call on someone’s part.

March 24, 2007by Jeffrey Wells39 Comments
« Previous post
Censorship in Wilton
Next post »
Resonates at a given time