Another thing I’m late on due to recent travelling is Entertainment Weekly‘s 6.1 cover story — “The Greatest Characters of the Last 20 Years.” The fact that EW has essentially become an Eloi under-25 girlie magazine explains why some of the most intriguing characters are near the bottom of the list and some of the blandest are near the top — naturally! 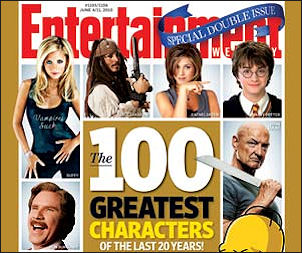 HE reader Kurt Bainer explains it as follows: “Wow, talk about upside-down rankings! There are a ton of characters at the bottom who should be at the top, and some that don’t even belong on the list in the first place.

“I have no problem with Homer J. Simpson as # 1 — still going strong after 21 years — but consider the placement of the following: