A friend spoke the other night to a guy who’s familiar with the comings and goings of Vincent Maraval‘s French-based Wild Bunch, the financier of Steven Soderbergh‘s two-part, 260-minute Che, which screened at Cannes to sharply divergent reactions. My friend’s first question to the guy, naturally, was, “So what about a U.S. sale of Che?” The guy, he said, “just looked” at him.

Ticket for Che party in the hills of Cannes that I never got to.

When he finally spoke, the gist was that he doesn’t believe the film will sell to a U.S. distributor “until Soderbergh cuts it.”
The odd thing, my friend said, is that the guy conveyed a kind of laissez-faire, “que sera sera” attitude about this. Wild Bunch’s mindset, he seemed to suggest, is also somewhere in the vicinity of “well, okay…whatever…we’ll see.”
Soderbergh, who is currently shooting The Informant, a corporate skullduggery drama with Matt Damon, isn’t working on cutting the Che film. Another source close to the action told my friend that Soderbergh “hit a wall” in the cutting of it prior to Cannes, and that whatever its final shape and length, fixing the Che situation is not a major Soderbergh priority as this moment. Not while The Informant is shooting, at least.
I don’t know that this is true, but if it is….it seems weird. As if Soderbergh and the Wild Bunch half almost given up on Che as far as the U.S. market is concerned. I’m not saying they have, but they seem to be putting out signals that they don’t precisely know what to do at this stage.
I’m not the only one who feels that Che is close to a masterwork. It breathes and seethes with political realism, you-are-there immediacy and high drama that doesn’t feel like “drama” — which is what makes it so brilliant. I felt levitated by it when I caught it in Cannes. But it wasn’t universally admired, and so the only move that makes any sense to me is to try and build a head of critical esteem by entering the fall awards derby, which will kick off in September. So Soderbergh and the Wild Bunch have to get it into theatres somehow this fall — no ifs, ands or buts. 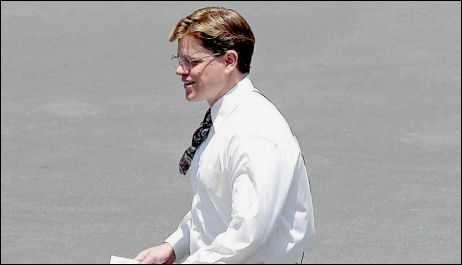 Matt Damon during recent filming of Steven Soderbergh’s The Informant in Los Angeles.

Even if they decide on an HBO small-screen deal, which will assure the showing of the entire thing and put to an end all talk about cutting it, they need to structure the sale so the film will go out theatrically first and then into the HBO airings. I don’t care about all the previous HBO deals which have demanded an HBO premiere. The awards derby is absolutely vital. Soderbergh’s direction is certainly deserving of a nomination. Ditto Benicio del Toro‘s performance as Che Guevara, Peter Buchman’s screenplay, the cinematography, etc.
Che has been pre-sold to most (all?) foreign territories, but with a negative cost of a reported $61 million or thereabouts. The Wild Bunch guys were reportedly demanding somewhere between $10 to $12 million for U.S. rights during Cannes. But if you’re talking about separate releases of the two films that comprise Che — The Argentine and Guerilla, which even Soderbergh has said will be the way to go after it plays as a special event movie that audiences will see all in one sitting — you’re talking a marketing budget of at least $12 to $15 million, if not more.
Add it up: $10 or $12 million plus $12 to $15 million equals a tab of $22 to $27 million.
The problem is that the likelihood of Che recouping anything close to this figure is highly unlikely. A prominent director told me after the Cannes showing that “this movie is going to make $5 million [theatrically] in the U.S….if that.” The solution, it seems, is that it has to be sold to HBO, but that its value will be diminished if it doesn’t first compete in the derby. Which means that someone — Mark Cuban? – has to put it out theatrically before 12.31.08.
If I were calling the shots, this, at least, is how I would be assessing the situation.