At least one other person, thank fortune, hates Wanted as much as I do — AICN’s Mr. Beaks! He says he’s been getting slammed by the fan boys because of this. Life can be hard when you say it plain. Good fellow! 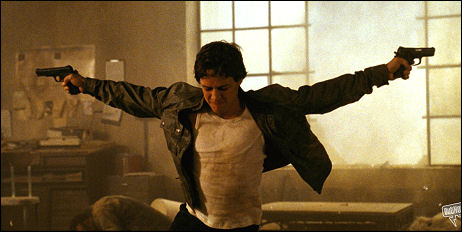 “It’s a bit of a stretch, but the bullet-curving, dome-popping, morality-flouting shenanigans so kinetically depicted in Wanted could be charitably explained away as a metaphor for young male empowerment,” he writes.
“By wantonly murdering complete strangers at the whim of a fate-weaving loom (not a metaphor, unfortunately), James McAvoy‘s timid working stiff, Wesley Gibson, is simply engaging in a very bloody form of self-actualization. He’s seizing the day by squeezing the trigger.
“Pol Pot would approve. In fact, if Pol Pot were still with us, he’d probably have a new favorite movie.
“In other words, Wanted is a massive step back for cinema and, I’d argue, society. It’s mainstreamed cruelty seeking to connect with the Texas Tower Sniper in all of us. Seriously, if you identify with Wesley Gibson, do the world a favor — get castrated.”