16 or 17 months after the 2006 Tribeca Film festival debut of Jeff Garlin‘s I Want Someone to Eat Cheese With, a smart and emotionally poignant character comedy in the general vein of Paddy Chayefsky‘s Marty, it’s finally going to be put in front of paying audiences. Three and a half months from now, that is. 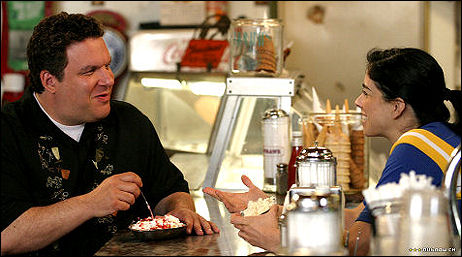 Jef Garlin, Sarah Silverman in I Want Someone to Eat Cheese With

IFC First Take and The Weinstein Company will be booking Cheese into theatres in “late September,” according to a just-received press invite to some early-bird screenings. My gut tells me that Harvey and IFC are sorta kinda looking to dump it in a super-supportive “we love you Jeff and we love your movie” type of way, but it deserves better than that.
I saw Cheese almost a year ago at the L.A. Film Festival, and thereafter described it as “a Big Fat Greek Wedding for witty fat guys, only without the wedding or the slobbery cattle-yard relatives.”
I also called it “the most entertaining and engaging audience-friendly film I’ve seen at [this festival] over the past eight days” and [that] it “definitely has the makings of a theatrical hit if it’s shaped up and sold right.”
Cheese is “a sharply written (here and there genius-level) comedy-drama about a witty, likably humble Chicago comedian named James (Garlin) who lives with his mom but badly wants a soulmate girlfriend. Vaguely fortyish, James is saddled with a yen for slurping down junk food late at night (which costs him in the romantic department), and he’s pretty good at getting shot down or turned down or fired.
“But as gloomy as James sometimes gets (and for good reason), he’s tenacious in a shuffling, good-natured, comme ci comme ca way, and you can’t help but feel for the guy and want him to succeed.
Cheese is “a small-scaled, funky-looking thing in a handheld 16mm vein (it could have been shot in the ’70s or ’80s…there’s nothing here-and-now digital in its technique or emotional approach), but it’s warm and engaging and pretty damn funny.
“Director-producer-writer Garlin — best known for his ongoing role as Larry David‘s manager in HBO’s Curb Your Enthusiasm — and his fellow performers (Bonnie Hunt, Sarah Silverman and a team of Chicago-based actor pals) are all top-notch. And in an unassuming little-movie way with the emphasis on spirit and tone and quirky-hip humor, Cheese works.
“I could feel the satisfaction levels in the house right away. The audience was totally grooving on it until the very last scene, but this is a fixable problem. The Weinstein Co. is in the process of acquiring, and if I know Harvey he’ll be pressing Garlin to re-cut or re-shoot the ending, which isn’t ‘bad’ as much as vague.
“If the finale is re-tooled in the right way, Cheese could catch on and then some. Garlin said last night he’s totally at peace with the ending and his heels are dug in, so maybe the film will go out as is. But even if it does critics and auds will still speak highly of it and it’ll do some decent business.
“Garlin’s model, obviously, is Marty. The Oscar-winning celluloid version of Chayefsky’s play, directed by Delbert Mann and released in 1955, is brought up several times, and Garlin uses a theatrical staging of the play in Chicago as a plot point.
“Cheese isn’t as sad or tear-jerky as Marty, and of course, being a Garlin thing, is coming from a wittier, schtickier place. Marty was about urban lower-middle-class pathos and the loneliness of a homely Brooklyn butcher (Ernest Borgnine). Garlin’s world view (and his film’s) is that of a candid, very bright, vaguely self-loathing Jewish comic with gumption…big difference.”