The Chicago Film Critics Association has reportedly (per Radar‘s Adam K. Raymond) instituted a coverage boycott against Fox releases (i.e., no features, profiles, and interviews — just film reviews) over unequal access to screenings and/or “being shut out of screenings entirely” by local Fox publicists. 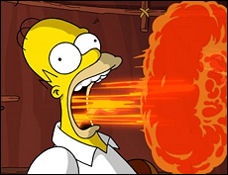 Except I asked about this last week, and was told by a 20th Century Fox spokesperson on Friday, 7.13, that Fox publicist Chris Petrikin had connected with CFCA spokeserson Dan Gire and “they had a good chat,” “we see their side and they see ours,” and “they are not going to continue this crusade against us.”
The nub of the matter is that Fox publicists are irate and freaking over review- embargo breaking by online critics and columnists, and that honcho Breena Camden has decided to get tough all over. This way no one in upper management can say she’s not taking strong action, but these restrictive measures are very sweeping and bludgeon-y.
Another indication of Fox’s extremely guarded screening policy is their decision to screen The Simpsons Movie for onliners on Thursday, 7.26 — the night before the nationwide opening. No other studio has done this to myknowledge — they either don’t screen dicey films or they screen them two or three days before opening. Fox also stipulatd that no plus-ones will be allowed to attend the 7.26 screening.
Fox’s message is basically “we don’t trust you and we really don’t trust your friends.” Obviously they don’t want early reviews because it’s the Wild West out there, etc., but the Simpsons brand skews older and smarter and could presumably benefit from early-ish reviews from the right people.
I suggested to Fox publicity that they should decide who among the onliners has behaved fairly and honorably (I have never burned them on a review embargo) and isolate these people and give them the courtesy of earlier screenings. My understanding is that this approach is being looked at with a degree of receptivity.