Chigurh is a ghost

Anne Thompson reports that the No Country for Old Men red-band trailer will be “live beginning Friday. ” You have to click on the “exclusive red-band trailer” link on the film’s website, but it didn’t work for me after six or seven tries on two different browsers. Wait — a reader has finally located a ready-to-go trailer with no sign-ins. It’s brilliant — a much better trailer than the previous G-rated one. 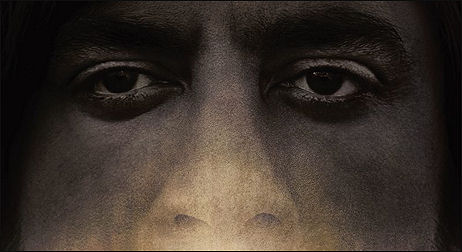 Thompson says that it’s necessary to see the red-band trailer “so that audiences can see why the mean SOB played by Javier Bardem is really, really scary.”

He is that, but Bardem’s character, a guy named Anton Chigurh (“sugar?”), isn’t an actual SOB. What he is, in fact, is a “ghost,” as Tommy Lee Jones‘ sheriff calls him at one point. That’s hitting it square on the head, I suppose (on top of Bardem’s face being a chalky white), but it’s the Coen brothers’ way of saying to the dumbasses in the audience that “this movie isn’t necessarily about a bad guy killing people and another guy trying to get away with some dope money.”

Chigurh is a kind of metaphor for enveloping darkness and cultural downfall…a falling-away from decency and values that some (mostly older guys) feel has manifested in this country. It’s all written down in Cormac McCarthy‘s original novel. Chigurh is also a bringer of fate. The other big theme in the book is, “You can’t see what’s comin’ and you can’t stop what’s comin’.” That’s Anton, baby.

McCarthy is a poet-novelist of the heartland and the Coens have made a thrilling art-house splatter film without the splatter — they show no gore, always cut away, etc. 90% of the people out there can’t perceive anything in a film except subject matter, but this is one of those cases when even the Seth Rogen types with the Cabo San Lucas T-shirts need to try and look beyond and within.