If you’re like me you love filmmaking style as an end in itself. I’ll always admire Michelangelo Antonioni‘s L’Avventura for that jaded ennui thing, but I adore the shooting and cutting. The brushstrokes are so clean and confident and assured, the kind that only a master scenarist can apply. Phillip Noyce, the director of Salt, has never lived (or sought to live) in Antonioni’s realm, but he’s just as good at dispensing high-powered, studio-funded action flicks (along with quieter, smaller-scaled films like The Quiet American and Rabbit-Proof Fence) as Antonioni was in fashioning his kind of experience. 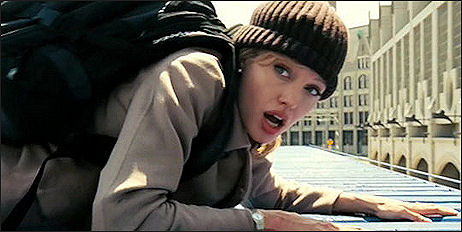 Know-how and finesse come in many guises, elegant caviar is elegant caviar, and bullshit always walks or takes the bus. Wanted, the last Angelina Jolie actioner, blew chunks from the get-go, but it really seems bad when compared to Salt. The Russian animal who directed it, Timur Bekmambetov, isn’t fit to shine Noyce’s boots.

Salt is one extremely well made, doo-wacky spy movie. The plot will make your head spin (unless you see it a second time, in which case it all starts to make some kind of sense), but it delivers constant tension and thrills by way of highly refined skill. It’s like a cartoon drawn by Renoir or Matisse or De Kooning. Every second of this 95-minute vroomathon feels like you’re sitting shotgun in a brand-new, high-powered BMW, straight out of the showroom. Each and every element, beginning with Jolie’s fierce, burn-through performance, has that exciting new-car smell.

The plot is a bit too complex for my taste, obsessed with hiding the ball in a somewhat cynical and robotic fashion, but it’s still the work of the very best people — the best M.I. team imaginable for this kind of venture — and that makes it a pleasure.

I’d like to congratulate James Newton Howard for creating one of the coolest-sounding action scores I’ve heard in….well, I think I can say years. And I love the moment when Jolie flips her shoes off and goes barefoot in preparation for heavy action. When’s the last time a star did this same exact thing? Tom Laughlin in Billy Jack?

Now, you can turn around and say, “Okay, fine, but how good are the internals? What is this film really about, how original is it, and how long does it stay with you after you’ve left the theatre? Does it hang in your head like Inception or is it gone the second you’re out the door?” My answer to all these questions is “you’re on your own, pally, but this is one well-made film.” 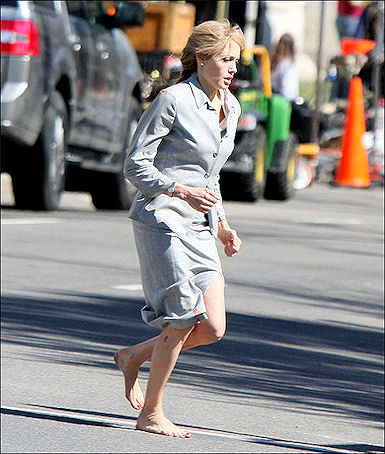 I have to say I like the first act, when Salt/Jolie, a CIA agent, is shown being freed from a North Korean prison – rough stuff, red swollen eye — and then flash-forwarding two years to her workaday gig in Washington, D.C. as…whatever, a CIA operative in a suit. This act contains Jolie’s first runaway, duck-and-hide scenes, and for my money the best of them. During this portion Jolie is an exceptional operative with a heart and a smile and a certain normality. This contrasts with the New York-based second act, when she morphs into full cyborg mode. The third act returns her to D.C. and the White House.

I admired the support provided by Liev Schrieber (although his face is getting chubby) and Chiwetel Ejiofor — a.k.a. “Chewy.”

“The Russians” aren’t the bad guys. As I mentioned in an earlier post, they’re basically sentimental Commies — nostalgic psycho assassins living in the Jimmy Carter past and trying to perpetuate the glory of belligerent pre-Gorbachev Russia. Out of their gourd, off the reservation.

I was thrown, I have to say, by the sudden intrusion of nuclear launch codes. Which I’m not going to explain except to say this happens in the basement of the White House. The last time a U.S. President made tough choices in this milieu was…was it Fail Safe with Henry Fonda as the President? Or Charles Durning in Twilight’s Last Gleaming? A guy named Hunt Block has the role this time.

Honestly? Truth really be told? I’m a bit of an old-fashioned guy pining for the Phillip Noyce of the early to mid ’90s, when he made the very movie-ish but smart and mostly-buyable Patriot Games and Clear and Present Danger. Sorry but I liked those two a bit more. For all its highly intelligent, grade-A action chops, Salt is aimed at the high-velocity, video-game ADD crowd. Either I’m getting old or action films are getting too corporate. Because Salt feels more like a madhouse Adderal speed ride than a nutritious adult movie with vegetables and emotion and an idea or two thrown in. Although I love the way the flashbacks are cut in. And the CG, which is sparingly used, is excellent when it turns up. 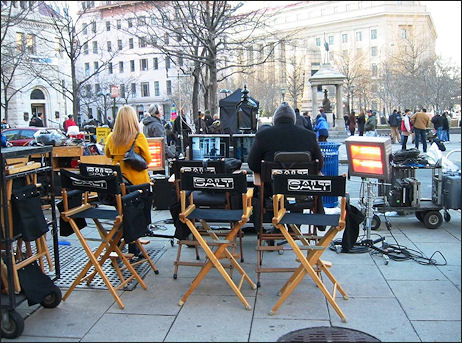 I especially loved an overhead shot of Jolie climbing alongside the ledge of the apartment building. But I don’t agree (and I’m not going to explain milieu or plot particulars) with having Angie leap from one structural elevator beam to another. Why couldn’t she just climb down?

Is this Angie’s Bourne? I guess so, yeah. Except I believed that Matt Damon ‘s character could actually do most of the stuff he did in his films. I bought into the Angie-as-cyborg-spy fantasy, but I didn’t believe she could actually beat up or subdue or otherwise overpower several guys bigger than herself. I bought maybe a third of the things she does in Salt. Which is why I loved the first act, when all she mainly does is run and climb and use her ingenuity. I just wish it had stayed on this level.

I’m most impressed by violent scenes when things are scaled down to some kind of recognizable organic level. I love fight scenes like Sean Connery vs. Robert Shaw in that train compartment in From Russia With Love.

Noyce ends Salt on a kind of open-ended, running-through-the-woods note. Because it pretty much just stops. The sequel, a critic friend said after the first viewing, will almost certainly be called Salt 2.

I don’t want to end this on a pissy note. I’ve seen Salt twice and have been fine with it as one of those “take it or leave it but it is what it is” type of experiences both times. If X-treme espionage on steroids does it for you, fine. And if not then you’ll have the pleasures of craft to fall back on.

Noyce is as good at action as Tony Scott only with more discipline, easily as good as Paul “shaky-cam” Greengrass , and much better at action than Chris Nolan. Salt feels like a 37 year-old directed it. Although credit should also go, I’m told, to stunt coordinator Simon Crane and editor John Gilroy.