I haven’t time to write anything now, but hats off to the father of rock ‘n’ roll, a guy who had it all and knew it all in the mid to late ’50s — a masterful singer-songwriter who played guitar like a ringin’ a bell, a guy who held mountains in the palms of his hands and owned it until…what, ’60 or ’61 or thereabouts? Okay, “Nadine” and “No Particular Place To Go” followed, but for the most part he cruised the nostalgia circuit from around that time on. He was the great Chuck Berry, after all — all he had to was show up, grin and perform “Maybeline”, “Sweet Little Sixteen”, “Roll Over, Beethoven” and “My Ding-a-Ling.” Play on, play on. Respect & condolences. 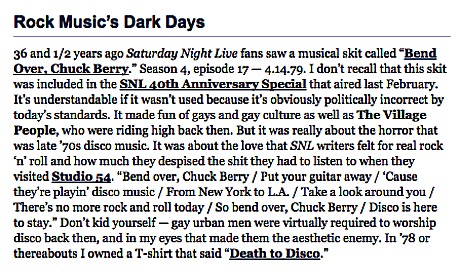