I flew to Las Vegas late yesterday afternoon to sample the 2007 Cinevegas Film Festival — just a weekend’s worth this time, I’m afraid. It’s a little after 9 a.m. now. I went downstairs for breakfast around 6:30 a.m. and there were a fair number of party vampires — raggedy guys in their 30s and 40s, groups of young girls in short hottie dresses — who hadn’t yet gone to sleep. 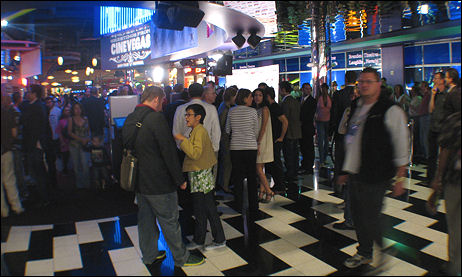 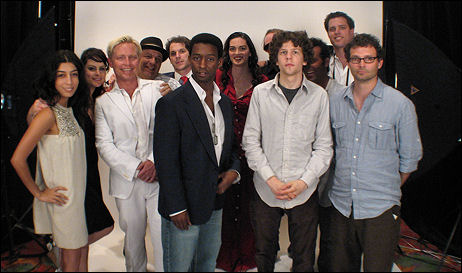 Cast and crew of The Living Wake (star Jessie Eisenberg is the only one I know — I’ll get the names straight later on — publicist Mickey Cottrell is at far right in larger version of photo) — Friday, 6.8.07, 8:05 pm

Vegas is a great place to visit for the first 24 hours, and an awesome place to be when you’ve only been here a few. You can feel the time-to-get-wild attitude when you first walk into your hotel. The problem is how the this environment makes you feel on the second, third and fourth days, etc. I’m not going to rant about this. I just prefer trudging around the Valley of Fire (about 20 miles north of town) to playing blackjack and eyeballing the waitresses.
I tried to see the second half of Simon Bross‘s Bad Habits (Malos Habitos), but festival volunteers blocked me at the entry point. They’d been told to let press people into films only from the very beginning; the guy I spoke to actually told me to “get in line” for the next show. So I asked BWR publicist Chris Libby to facilitate, and I’m told today will be different.
I got into the 8:30 pm screening of Sol Tryon‘s The Living Wake, which the press notes say is “an intelligent, beautifully acted and gloriously funny independent comedy.” It’s about a self-proclaimed artist and genius (Mike O’Connell) who wants to kill himself, and has asked his best friend (Jesse Eisenberg) to chronicle his final hours, including a final life-celebration party — i.e., a “living wake.” 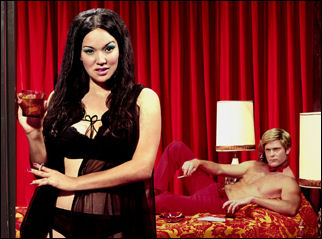 I could hear people laughing as it played, and I know several songs were sung. But I just got back from Europe two days ago, and the urge to crash around dinner hour is overwhelming. You feel like barbells are pulling your eyelids down. I drank a double espresso and a Red Bull before the film started, but I was gone five minutes after the lights went down. The Living Wake is playing again on Sunday at 1:30 pm, at which point I’ll try again.
I managed to avoid the get-in-line guy and stumbled into Anna Biller‘s Viva around 10 pm. It’s a wink-wink soft-core sex movie mixed in with an early ’70s design movie (clothes, home interiors, etc.) that apes the overlit photography and bad acting of sexploitation films of the ’70s. Nothing like Radley Metzger‘s — more like Russ Meyer‘s without the class.
It’s pretty good in this sense, but after a while bad acting is bad acting, and Biller — who stars as well as directs — reads her lines with the exact same inflections and expressions (Betty Boop voice, come-hither look, arched eyebrows) over and over and over. The film is almost doing the same genre-tribute routine that Grindhouse did, but its low-grade aspects are a little too convincing.