I was kind of reminiscing just now about a visit to the northern Italian set of Renny Harlin and Sylvester Stallone‘s Cliffhanger, for a N.Y. Times profile called “Can Stallone Get A Grip?”. I’d just come from the 1992 Cannes Film Festival. The crew was shooting at a very high elevation location in the scenic Dolomite mountains, which surround Cortina d’Ampezzo, a serene little skiing village that hosted the 1956 Winter Olympics and was also visited by For Your Eyes Only, the Roger Moore 007 film that came out in ’81. 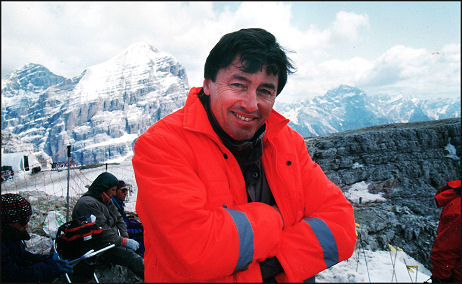 I visited Cortina again about eight years ago, and was very dismayed to learn the town had gone to to hell due to its popularity with the wrong kind of American tourists — i.e., bearish middle-aged couples from Texas and Kansas and Oklahoma who spoke too loudly in mixed company, wore repulsively-designed ski sweaters and seemed to enjoy dancing to awful-sounding Euro disco in the hotel lounges. I was sitting in a bar listening to this 60-ish bearded guy with a Houston accent talking about how “we really loved goin’ to the Loove…the wife went back on her own the second day, all by her lonesome.” That’s it, I said to myself — I’m never coming back here.