An hour ago I taxied over to the shop of a freelance mechanic named Dennis to pick up my motorcycle, which had suffered minor damage (shattered plexiglass, smashed turn signal) after a small parking-space accident happened a few days ago. Within seconds of leaving his place (about a block east of Fairfax) I could feel something wrong. The bike had no power due to some kind brake-lock problem with the front tire, which kept me from getting up to any speed. Imagine driving a car with your foot tromped on the brake and the emergency brake on — it was like that. 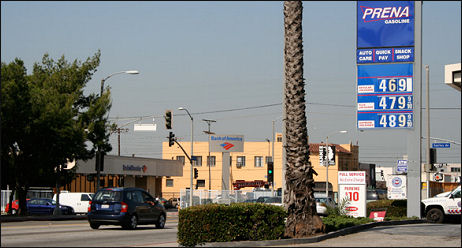 I called Dennis as I was putting some air in the front tire (at a gas station at the corner of Fairfax and Melrose) and said, “Something’s really wrong, man…the brake is locking the front wheel or something.” He told me to bring it right back, so I pulled into Fairfax traffic heading north, but the bike would barely move. And then like a shot and right in the midst of a cluster of cars, the front wheel totally froze and the BMW and I both crashed onto the pavement, the bike sitting on my left leg and pinning me to the ground for a few seconds. No real damage to speak of — a bloody left elbow and a scraped left knee plus my nice black dress pants torn in two places.
The cars behind me stopped in time, thank God (nobody was going too fast), and two guys got out and helped me pick the sucker up. I feel fine — just bruised and cut. A slight ache in my rib cage on my left side, but nothing much. The body goes into mild shock when you have a sudden trauma like this, so I’ll probably feel some more minor bruise pain and muscle ache when everything settles down. This only happened 40 minutes ago. Dennis couldn’t figure what had happened, but he obviously screwed up big-time while doing the body work. He had planned to drive out to Lancaster to visit his wife in a rehab facility, so I told him to stay with that plan and we’ll talk tomorrow. His friend (i.e., his wife’s brother) drove me home.
I feel fine about being a motorcycle guy because I didn’t get hit by anyone or make any mistakes — the damn thing just froze up on me.