There are plans afoot to make a movie based on the Color Purple musical on Broadway that closed two months ago, starring Fantasia Barrino. I never saw it but I probably would have refused an offer of free tickets. This is no reflection on the show (which was said to be quite good), but recollections of Steven Spielberg‘s film of the same name. 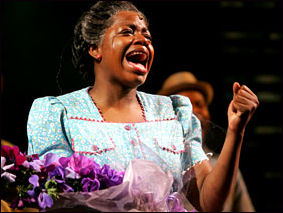 Exceptional trauma burns into one’s consciousness and remains like a scar. I saw this Oscar-nominated fiasco in a Burbank screening room 23 years ago, and it’s like it happened yesterday.
We all go into films with our mollecular constitutions intact, but the chemistry changes if the film has a spiritual current of any force. We begin to feel more awake, alive, aroused if the film is on the right track, and we start to feel more and more depleted and nauseous if it’s not. The gross theatricality of The Color Purple made me feel as if the oxygen levels in the screening room were being slowly emptied.
I came out numb and staggering. It caused me to completely reevaluate Spielberg, whose films I had mostly admired and even worshipped up to that point. In my head the name “Spielberg” became permanently damaged after this. I came out of it despising Whoopi Goldberg, Danny Glover, Oprah Winfrey…everyone in the cast. Composer Quincy Jones, producers Kathy Kennedy and Frank Marshall…everyone came out tainted.
No, I’m not going to explain my reservations in detail. I only know that I’ve never felt so smothered and assaulted by a sense of falseness and auteurist pretense in my entire moviegoing life. 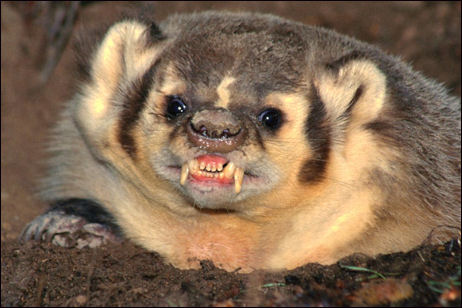 When I was three or four I somehow became terrified of a big color illustration of a badger in a children’s book. I was so fearful of this image this that my parents promised to throw the book into the garbage in order to calm me down. (I later learned that they only hid it in the bottom of a bureau drawer.) The Color Purple became the near-equivalent of that badger in my adult life.