From a 10.12 piece by The Nation‘s William Greider: “Fresh chatter among Washington insiders is not about whether the Republican Party will win in 2016 but whether it will survive. The fear that Donald Trump might actually become the GOP nominee is the ultimate nightmare. Some gleeful Democrats are rooting (sotto voce) for the Donald, though many expect he will self-destruct. 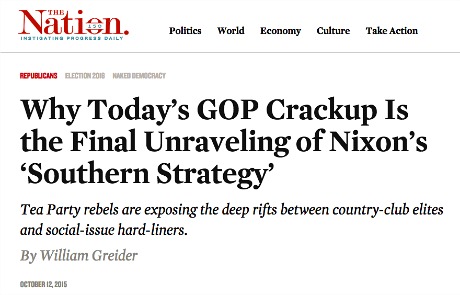 “Nevertheless, Republicans face a larger problem. The GOP finds itself trapped in a marriage that has not only gone bad but is coming apart in full public view. After five decades of shrewd strategy, the Republican coalition Richard Nixon put together in 1968 — welcoming the segregationist white South into the Party of Lincoln — is now devouring itself in ugly, spiteful recriminations.

“The abrupt resignation of House Speaker John Boehner was his capitulation to this new reality. His downfall was loudly cheered by many of his own troops — the angry right-wingers in the House who have turned upon the party establishment. Chaos followed. The discontented accuse party leaders of weakness and betraying their promises to the loyal rank and file.

“At the heart of this intramural conflict is the fact that society has changed dramatically in recent decades, but the GOP has refused to change with it. Americans are rapidly shifting toward more tolerant understandings of personal behavior and social values, but the Republican Party sticks with retrograde social taboos and hard-edged prejudices about race, gender, sexual freedom, immigration and religion. Plus, it wants to do away with big government (or so it claims).

“The party establishment, including business and financial leaders, seems to realize that Republicans need to moderate their outdated posture on social issues. But they can’t persuade their own base—especially Republicans in the white South—to change. The longer the GOP holds out, the more likely it is to be damaged by the nation’s changing demographics—the swelling impact of Latinos and other immigrants, and the flowering influence of millennials, the 18-to-30-year-olds who are more liberal and tolerant than their elders.”

Three and a half years ago I posted a piece called “Solve Almost Everything.” It basically said that if you cut loose the hinterland crazies many of the nation’s problems would vanish in one fell swoop. Trust me — a lot of them really would.