It seems pretty clear that The Avengers is going to work for almost everyone, perhaps even me. (Although I can’t entirely accept the idea of Joss Whedon having hit a home run. I’m guessing it’s probably a triple that Justin Chang and others are calling a four-bagger.) But no matter how good it turns out to be, I know I’m probably going to experience issues with costar Robert Downey because he’s been bothering me ever since he went corporate and turned into a franchise whore and a Republican. 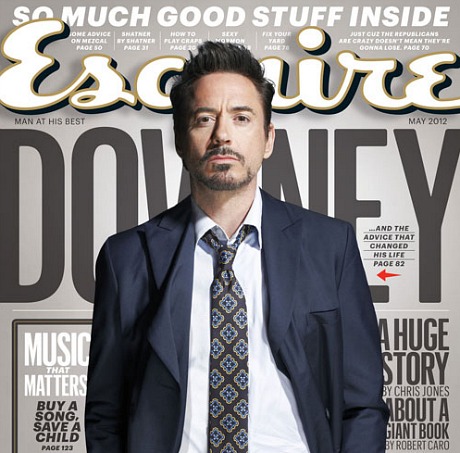 And yet when I read Downey’s views this morning in Carl Fussman‘s Esquire cover piece, he sounded like my idea of a perceptive, highly intelligent fellow. A guy I could easily talk to for hours on end. He doesn’t miss a trick. And yet I know he’s a longtime pal and admirer and to some degree a philosophical colleague of Mel Gibson (“Downey has looked up to Gibson as an older brother and authority figure and mentor for a long time,” a onetime Downey confidante told me last December). And that being a rightie Downey will probably be supporting Mitt Romney against Obama. And if he could he’d be making soul-poisoning franchise flicks like Sherlock Holmes and Iron Man and Perry Mason until he’s 75 years old.

He just bothers me these days, and I used to like his work a lot. We’re really only talking about the last two to three years and not even that because I loved it when he slugged that little kid in the stomach in Due Date (’10). But he seems to have traded in that actor he used to be and become a much slicker model. The guy who costarred or starred in Richard III, Restoration, One Night Stand Two Girls and a Guy, In Dreams, Bowfinger, Black and White, Wonder Boys, The Singing Detective, The Outsider, Kiss Kiss Bang Bang, A Scanner Darkly, Fur and Zodiac has apparently left the room.

Downey used to be a drug addict in big trouble. Now he’s totally cleaned up, married, a new father, etc. He’s obviously in a better place, and good for that. But sometimes artists and performers are better at their game, or at least are more creatively interesting, when their personal lives and lifestyles are less settled. There’s something about living a wild-ass life and and wondering what and who the hell you are and going through emotional upheavals that seems to feed the right kind of creativity. Sometimes. And sometimes not. I know that unstable and angry John Lennon was more of a creative firecracker in the early to middle years (early ’60s to early ’70s) than he was in his comeback phase of ’79 and ’80, when he was a happy family man. Sid Ceasar was better when he was a live TV crazy man in the middle ’50s who ate and drank too much. Brian Wilson‘s genius period (’63 to ’68) happened when his personal life was highly unstable and drug-riddled.

It may be that Downey’s Tony Stark performance in The Avengers will be completely fine, and I’ll be able to put all this aside. But I somehow doubt it.

“Downey is in the factory business now, the manufacturing business,” the ex-confidante explained. “It’s a different business than being an actor. He’s in the cartoon business. He’s being successful in cartoons. And the way it works is, you keep doing those movies until people get sick of you and those movies are not available anymore. Bruce Willis did these movies in the ’90s until it ran out for him. He kept doing them when he could do them. This is what Downey is doing now. As long as there are offers, and the calendar has slots to fill, you just say ‘what is the deal?’ and ‘what are the dates?'”