The positive buzz (mostly from Cannes-covering British journalists) and yesterday’s positive review from Variety‘s Russell Edwards aside, I’ve been told that Anton Corbijn‘s Control — a black- and-white biopic of Joy Division’s Ian Curtis, who hung himself at the peak of the band’ s success — is a fairly conventional work. 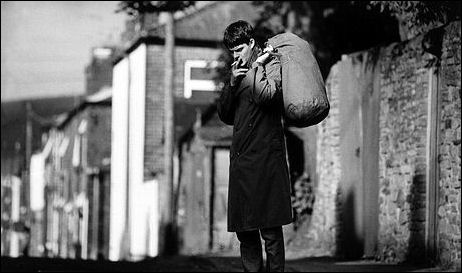 “It follows the usual form,” a critic friend (and a once-devoted Joy Division fan) said this morning. “It tells Curtis’s story going from one chapter after another….the old ‘and then this happened, and then this happened’ approach.” He also said “it’s too domestic,” which always seems to happens when your source material comes from a widow or ex-wife, in this instance Deborah Curtis and her memoir, “Touching From a Distance”. Plus it mainly focuses on the band playing live gigs, which the critic-fan says is wrong since Joy Division was mainly a studio band.
On the other hand, another respected critic friend says Control is definitely worth catching.
I would have gone to last night’s Director’s Fortnight Control screening at 7 pm, but I had to go to an early screening of Leonardo DiCaprio‘s global-poisoning doc 11th Hour, since I’m taking part in an early-afternoon interview session with DiCaprio and co-directors Nadia Conners and Leila Conners tomorrow at the Hotel du Cap. I have to hold on my review until after the public screening that day, which would be sometime around 2:30 or 3 pm.