There is suddenly hope for all anti-Ed Zwick partisans, especially those who are grimacing over Zwick’s intention to make a movie out of “Defiance: The Bielski Partisans” by Nechama Tec, a true story of the Polish Bielski brothers who fought Nazi occupiers and wound up saving 1200 Jews from extermination. 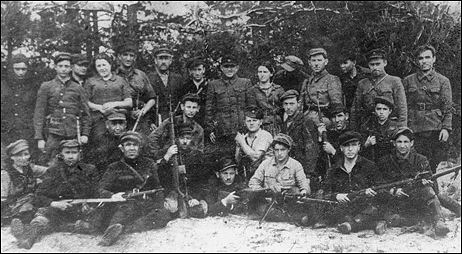 A group of Polish anti-Nazi partisans, in the early 1940s, including I don’t-know-how-many Bielski Brothers.

The hope factor has come in the form of a challenge from director Phillip Noyce — a far more accomplished craftsman (Catch a Fire, Clear and Present Danger, Rabbit-Proof Fence) than Zwick with a demonstrated aversion to the emotional underlining and overplaying that Zwick is infamous for — and his intention to make his own Bielski brothers movie.
Noyce will be working from a script by Kathleen McLaughlin, which is based on Peter Duffy‘s “The Bielski Brothers: The True Story of Three Men Who Defied the Nazis, Built a Village in the Forest, and Saved 1,200 Jews”.
Noyce has pacted with producers Mace Neufeld and Jonas Goodman, and has secured “the life rights of the key surviving Bielski members including the last living Bielski brother,” I’ve been told. With any luck Zwick will get spooked and decide to base his next mawkishly emotional epic on some other true story. These things never turn out simply or without complication, or course, but it should at least be understood that Noyce’s is the more promising Bielski Brothers project and that Zwick’s represents the dark side of the equation.
I’ve got copies of both scripts. Zwick’s Defiance, dated 5.1.07 and runnning 112 pages, says on the front page that it’s based on Tec’s “Defiance” book and “”the screenplay by Clay Frohman.” McLaughlin’s The Bielski Brothers, dated 9.29.06 and running 119 pages, says it’s based on the Duffy book.
There were three “headliner” Bielski brothers — Tuvia, Zus and Asael. Daniel Craig, I gather, will play Tuvia in the Zwick film. (In Zwick’s script Tuvia is the most impasssioned and super-studly of the three.) A voice is telling me that one of the other two brothers will be played by Sean Penn.
We almost certainly won’t see two Bielski brothers films, of course. Either Noyce or Zwick will wind up folding his tent.
How relevant is the Bielski brothers saga in today’s terms? Obviously a story of impassioned locals fighting a big bad invader has echoes in the battle now taking place in Iraq. But I wonder how relevant this story will seem to younger audiences. World War II happened 60-plus years ago. It’s obviously not their war or their father’s war, but their grandfather’s. One can only repeat the old truism that for story-tellers of all kinds, Adolf Hitler is the gift that keeps on giving.