HE’s Michael Merlob has filed the following from ComicCon about Francis Coppola‘s Twixt preview-and-discussion panel: “Coppola descended on Comic Con in what was the most enjoyably disastrous panel in recent memory. There with composer/musician Dan Deacon and star Val Kilmer, Coppola made for a lovably fuddy-duddy host as he introduced the first-ever promo footage from his new gothic horror film Twixt. 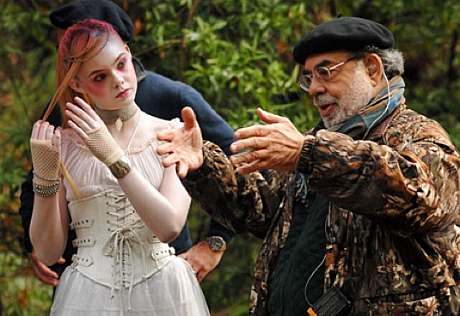 “The Twixt footage suggests an unhinged student film. With Kilmer playing a low rent horror author who becomes embroiled in a small town mystery while on a signing tour, the footage felt underwhelming. We all know what Coppola’s been up to the last few years, stuck in his own little world, and his recent output, regardless of how personal it may be to him, has left many frustrated. Twixt looks to be no different in spite of its genre trappings.

“Coppola explained that the film came from a dream he had about Edgar Allen Poe, and indeed Poe himself makes an appearance (in a much more physically accurate form than what John Cusack appears as in the upcoming The Raven). Elle Fanning costars.

“Kilmer looks delightfully deranged in the footage that was shown, and it’s possible that Twixt could become a sort of cult disaster, a whacked-out ode to the very artistic excesses of its lead and creator. Indeed, it feels as though Coppola himself has become Colonel Kurtz — bulky, charismatic if not magnetic, enveloped in his own fantasies and creative morass.

“Interestingly, Coppola also announced his intention to take Twixt on the road, four-

wall style, and literally play alternate versions of the film to audiences, featuring Deacon’s live music. Following this announcement, Coppola showed the crowd a re-mixed version of the promo reel that he drew up on the fly using an iPad, with Deacon providing live music to accompany it, at one point spinning an almost hip-hop beat into the mix set to Coppola’s voice uttering the word “Nosferatu” repeatedly — bizarre and hilarious.

“Unfortunately, given the mediocre quality of the footage and Coppola and Deacon’s comical fumbling with the computers onstage, the whole thing came off as merely odd rather than engaging.

“The audience however, in spite of the technical mishaps, remained enthused and engaged simply by virtue of Coppola’s presence. He made for a wonderful host, and his passions thankfully remain intact and unchecked. While there’s a stroke of artistic brilliance in Coppola’s technical ambitions for Twixt, it doesn’t appear that the content itself is worthy of the pursuit. Hopefully the iffy quality of the presentation isn’t indicative of the film as a whole, but for now Twixt appears to be Coppola’s latest domed fever dream, leaving him but no one else inside the hothouse bubble of his mind.”