“The revolt in the Arab world is not merely against this or that resident dictator but a worldwide economic tyranny,” journalist John Pilger wrote this morning. “A tyranny designed by the US Treasury and imposed by the US Agency for International Development, the IMF and World Bank, which have ensured that rich countries like Egypt are reduced to vast sweatshops, with half the population earning less than $2 a day. 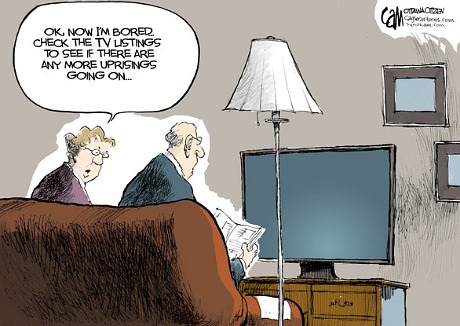 “The people’s triumph in Cairo was the first blow against what Benito Mussolini called corporatism, a word that appears in his definition of fascism.

“How did such extremism take hold in the liberal West? ‘It is necessary to destroy hope, idealism, solidarity, and concern for the poor and oppressed,” observed Noam Chomsky a generation ago, “[and] to replace these dangerous feelings with self-centered egoism, a pervasive cynicism that holds that [an order of] inequities and oppression is the best that can be achieved. In fact, a great international propaganda campaign is under way to convince people – particularly young people – that this not only is what they should feel but that it’s what they do feel.”

“Like the European revolutions of 1848 and the uprising against Stalinism in 1989, the Arab revolt has rejected fear. An insurrection of suppressed ideas, hope and solidarity has begun. In the United States, where 45 per cent of young African-Americans have no jobs and the top hedge fund managers are paid, on average, a billion dollars a year, mass protests against cuts in services and jobs have spread to heartland states like Wisconsin. In Britain, the fastest-growing modern protest movement, UK Uncut, is about to take direct action against tax avoiders and rapacious banks.

“Something has changed that cannot be unchanged. The enemy has a name now.”