Warner Home Video’s new Bluray of William Wyler‘s The Best Years Of Our Lives looks tolerable for the most part and in some portions is quite pleasing, but — I’m genuinely sorry to report this — it looks compromised here and there by Egyptian grainstorms along with a few soft-focus passages. This is partly, I’m told, because the original negative was lost a long time ago (possibly due to being on a ship that sank in the North Atlantic), and that the source materials are from a couple of fine grain prints (neither one of which is completely usable) plus a dupe negative or two. The bottom line is that this 1946 classic and Best Picture Oscar winner can never look wonderful and will always look a bit dupey and compromised in spots. I accept that, but I swear that the old DVD looked just as good if not a bit better on my old 26″ Sony flatscreen than the Bluray does now on my 60″ Samsung. 13 years ago I had no significant issues with the DVD, but today’s Bluray is an in-and-outer. 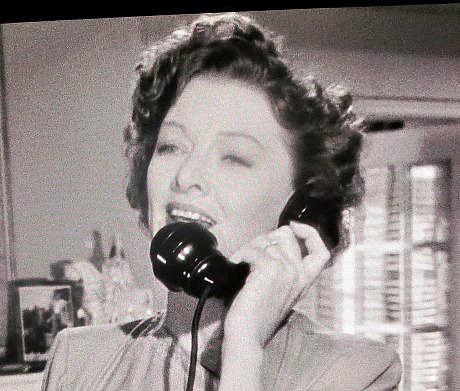 The great Myrna Loy trying to smile and laugh her way through a mosquito swarm in an early scene from The Best Years of Our Lives.

Would you like me to explain why for the 44th time? Because Bluray technology tends to make grain look more vivid — it heightens and intensifies the impact of the stuff. In many ways Blurays of classic films can be made to look much better than they did when projected, say, at the Bleecker Street Cinema in 1979, but at the same time they make the inherent grain structure look more pronounced. Unfortunate nature of the beast.

I’ve been watching The Best Years Of Our Lives for a long time now — on cable in the ’70s, VHS in the ’80s, laser disc in the ’90s, DVD in the late ’90s and early aughts and now Bluray. It’s always looked relatively decent, but it looked a little bit better on the old laser disc and better still on MGM Home Video DVD that came out 13 years ago. So I was naturally expecting a nice “bump” when I popped the Bluray in last night, but I immediately suffered cardiac arrest during the opening airport scene when I saw that Dana Andrews, Harold Russell and Fredric March were all but choking on billions of digital grain mosquitos, swarming and massing around their heads like some terrible Biblical plague.

Then I noticed an early closeup shot of Russell looking out of an airplane bombardier window in the morning that was almost stunningly out of focus. “Good God, is this really happening?”,” I asked myself. “This can’t get any worse.” The film gradually improved but I was so upset by those opening 20 or 25 minutes that I had to sit down to stabilize myself. I felt shattered. And then, as noted, the grain subsided about 25 minutes in (somewhere during or after the drunken visit at Butch’s) but then the issues returned from to time. Then they would go away and then soften up and then the film would reverse course and look pretty decent again.

The Bluray, in sum, is inconsistent in quality. It’s moody. Sometimes it looks fine, sometimes really good and at other times it says “fuck it” and opens the screen door and allows billions of mosquitoes to fly into the room. And don’t tell me it’s my sharpness settings. Almost every single Bluray I have looks un-besieged by mosquitoes except in the case of this one, Criterion’s 12 Angry Men, Stagecoach and The Third Man Blurays and three or four other “problem” discs.