Nine or ten months ago Kevin Spacey declared himself an avid fan of 19 year-old singer Leon Jackson, who came out of nowhere a year ago after winning the grand prize on The X Factor, a British-styled American Idol show. Here‘s Jackson’s latest music video (no embed code) — a tune called “Creative.” 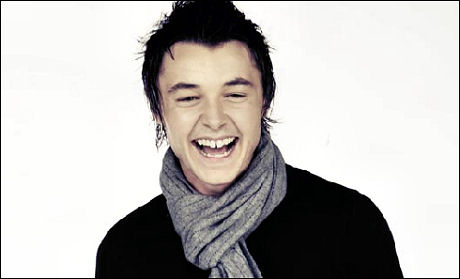 Jackson is striking because his voice sounds much deeper and “older” than you might expect from a young skinny guy. (And short — he looks to be Darin- or Sinatra-sized, to go by the videos and photos.) And because he’s six months younger than my older son, Jett. His sound is a little schmaltzy for me, but within its particular sphere and fan base big-band crooning is apparently happening in a big way. In England, Canada, and, I’m guessing, here, although I don’t know anyone who’s a big fan. Okay, I know one.

I wrote Jett, who’s something of a trendy music-phile, and asked his opinion of Jackson. I assumed he’d have one, being a temporary resident of England and all, but he hasn’t heard his stuff, so that tells you something. Here‘s a page with Jackson’s music videos.

“My life is all about music,” Jackson says on his site. “I’m learning to play the guitar, writing songs and just immersing myself in music. I’m obsessed with contemporary jazz and my heroes are Harry Connick Junior, Jamie Cullum and of course, Michael Buble who has been such an amazing champion for me. I feel like I’ve lived 20 years in the past year because I’ve learnt so much and I can’t wait to get out there and let everyone know what I’ve been doing.

“I’m so grateful for every moment of my life. Every now and again I just stop and close my eyes to check it’s all real when I open them again.. I want to make every second count.” Good attitude. Bright future.