There’s some doubt in the air about whether the Weinstein Co. is going to give Wayne Kramer‘s Crossing Over, a Traffic-like drama about the immigration situation between Mexico and the U.S., a modest platform-type release in December. One of the reasons for uncertainty is that the Weinstein Co. recently mailed a list of ’07 films to Academy members, and Crossing Over wasn’t on it. 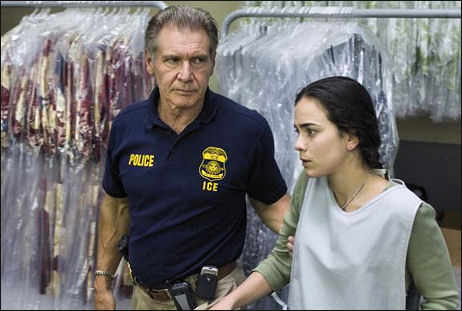 Kramer (The Cooler, Running Scared) directed and wrote with Harrison Ford, Cliff Curtis, Ashley Judd, Sean Penn, Ray Liotta, Alicia Braga, Alice Eve and Jim Sturgess topping the cast. My personal suspicion is that the Weinsteiners will mainly be pushing The Great Debaters (a Denzel Washington-inspires-the- students drama, based on a true story) along with I’m Not There and Control, but a person on the Crossing Over team believes nonetheless that some kind of limited opening will happen before 12.31.07.

“There’s a very strong possibility that we’ll platform in December (probably mid to late) and go wider in January,” he says. “A Crossing Over trailer should be coming out in the next couple of weeks, and Harvey [Weinstein] seems very supportive of the film. Anything can change, as it often does in this business, but the goal is to release in 2007, specifically because the immigration issue is white hot right now and the film is set in 2007 (in the week that the immigration bill failed in Congress).

“And Harrison Ford, by the way, gives one of the best performances of his career in our film. For all his fans who were disappointed that he didn’t participate in Traffic or Syriana, this one is for them. Also, Summer Bishil from Nothing is Private is a revelation, and look for good performances from Alice Eve and Jim Sturgess. And from Sean Penn, of course, who is incapable of delivering a false moment.”