There’s a good Chris Jones story about Benicio del Toro in the current Esquire that explains the genesis of a certain white T-shirt that the 40 year-old actor wears in Things We Lost in the Fire — a T-shirt with the words SAME SAME printed on the chest. Not just in a jogging scene (when you can read it plain as day) but in other scenes also — covertly, under shirts, jackets and overcoats, unseen but “there.”

“It became very important to him that Jerry” — Del Toro’s junkie character — “wear the T-shirt in Things We Lost in the Fire,” Jones writes. “It made perfect sense to Del Toro that this would be so.

“Except the film’s director, Susanne Bier, didn’t like the T-shirt,” Jones relates. “She didn’t get it. Maybe it was the language barrier; probably it was that Del Toro is flat-out hard to get. Either way, she resisted, and the Bull dug in his hooves, back and forth like that, until Bier finally relented, and today we see Jerry jogging in this curious T-shirt, spun out of some L.A. kid’s graffiti and a Vancouver souvenir shop.

“But that wasn’t the end of it. Del Toro’s known as Benny the Troublemaker not for nothing. There are other scenes, several of them, in which only he knows he’s wearing the T-shirt, a silent rebellion. He turned it inside out, wore it under blankets and bathrobes, even sneaked it onto a shelf in the background. For him, SAME SAME had become his mission. ‘Because at that point, I am that guy,’ he says. ‘I become the book.'” 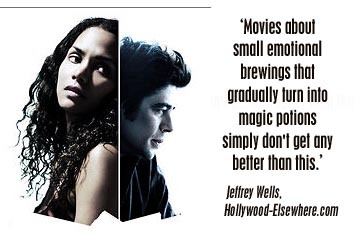 Thanks to The Envelope‘s Tom O’Neil for the link to my Things We Lost in the Fire review.

All great actors are at least a little bit eccentric; some a little more so. One reason that Benicio del Toro is such a phenomenal actor is that he’s always considering the eccentric-weirdo whims that flash in his head (call them inspirations, sugges- tions, orders…whatever) and acting accordingly. All hard creative people receive messages from their inner well-of-wisdom all the time. Sometimes the messages are frivolous or unformed, but other times they tell you exactly what to do or say or the move you need to make.

I did some work on a Los Angeles magazine cover story in the summer of ’95 about the “New Noir” movie generation — guys like Bryan Singer, Don Murphy, Roger Avary, Benicio Del Toro and others who’d recently made films that had a film-noirish criminal edge.

Every big name who was featured in the piece met down at Smashbox Studios in Culver City, and the idea (hatched by editor Andy Olstein) was for everyone to hold a snub-nosed .38 or a .45 automatic and aim it at the camera. They were all okay with this except one — Del Toro.

He conveyed his opposition by motioning me over to a corner, or maybe an unoccupied room. (It happened 12 years ago; a couple of details are foggy.) He looked sad, grim. “I don’t want to do this thing with a gun,” he said. He didn’t like weapons, and he hated the cliche of aiming one at the camera. He wasn’t just disagreeing with the concept — the idea of posing with a gat seem to really disturb him deep down.

I could see that the idea was messing with his head, or perhaps with some core belief system…who knew?…so I figured what the hell. One guy not holding a gun wouldn’t be so bad, I reasoned, and it’ll probably add something to the layout. Uniformity is a mark of mediocrity, after all. So I told Del Toro not to sweat it, “this’ll be cool,” and went over to Olstein to break the news. 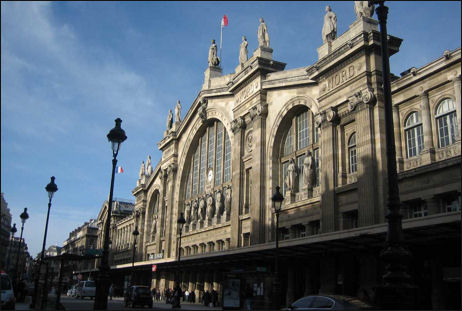 Olstein didn’t want to hear it. Everybody had to point a gun, he said. I should have worked harder to persuade Olstein that arguing with Del Toro was pointless, that it didn’t matter anyway, that it would give a certain distinction for one of the young Hollywood bucks to not hold a gun. But Olstein wouldn’t back off so I pussied out and went back to Del Toro to tell him Olstein was adamant. So was Del Toro. He’d dug in his heels and that was that.

Benicio went before the camera an hour or so later and refused to hold the gun, and Olstein finally caved.

The next time I ran into Del Toro along was at Gare du Nord in Paris on January 1st, 2000. He’d brought in the new millenium with some actress (I forget who) somewhere in the city, and was now waiting for a train to London where he was shooting Guy Ritchie‘s Snatch. We compared notes, talked a bit, shook hands and I walked off to rent a car. Cool coincidence, nothing more.

I’ve run into Benicio a few times since — at press junkets, a few parties, at the Mercer Hotel in Soho last year — but I’ve never quite forgotten that vulnerable but really complex look on his face — pained, worried, intractable — when he said what he said at Smashbox. Serious guy. Meant it. Formidable.

One other thing: Benicio’s junkie character is heavily into Lou Reed in Things We Lost in the Fire, and Reed’s “Sweet Jane” is heard twice in the film — early on and over the closing credits.