“No Sudden Move (HBO Max, 7.1) is an ambitious, light-spirited, high-twist modernist noir in the tradition of Devil in a Blue Dress and Steven Soderbergh’s own Out of Sight.

“Soderbergh, who shot and edited the film, works with a knack for the drama of amorality: the off-kilter camera angles, the lean mean mood of hardboiled misanthropy, the relish that great actors can take in playing crumbum hoods. The movie is clever and blithely vicious, it keeps you guessing, and it invites you to share Soderbergh’s joy in filmmaking.

“And yet: Just when the movie’s interlocking treacheries should be catching fire, you feel them wilt a bit.

“Soderbergh doesn’t make any obvious wrong moves, but the plot isn’t quite the tightly hot-wired tale of descent and payback we’ve been geared to expect. It’s more like watching an enormous, slightly abstract jigsaw puzzle of corruption come together.

“There is, it turns out, a Larger Theme at work, one that hinges on a Mr. Big played with graying omnipotence by Matt Damon. And while this kind of late-in-the-game revelation is fair game, the film is a little too pleased with its corporate conspiracy-theory dimension. You watch it and think: We’ve been here before, lots of times.

“For all its pleasures, No Sudden Move doesn’t quite make the old seem new again.” — from Owen Gleiberman‘s 6.18 Variety review. 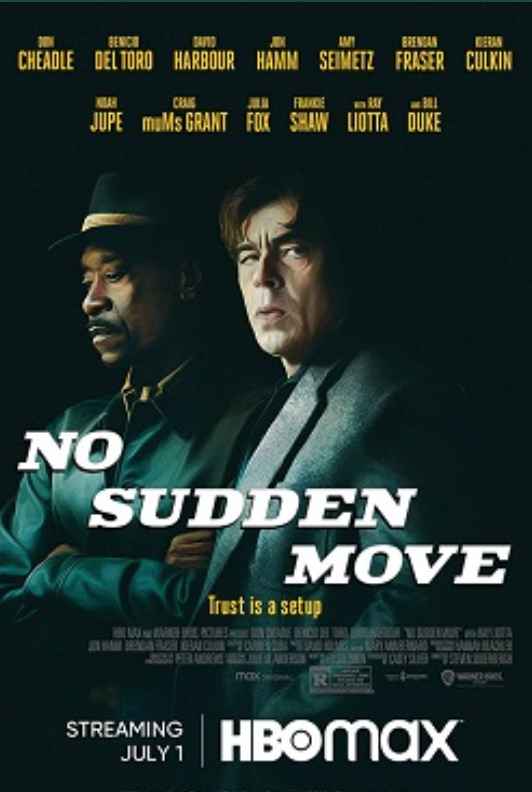