DataLounge, the greatest, funniest and most nourishing gay gossip site on the entire planet, is 27 years old, and glory hallelujah.

I don’t know how large the readership is, but I love that DL is part of the conversation, and especially that the commenters don’t filter themselves. Because when it comes to judging or challenging sacred-cow narratives in the universe of woke (yes!), they’re protected by their identity.

Straight white guys have to phrase carefully and watch their backs, but gay guys (especially under the cloak of DL anonymity) don’t give a toss.

Read their recent Bradley Cooper comments…merciless here and there. And their remarks about Brad Pitt‘s new GQ cover, etc.

6.22 thread titled “Congratulations to all the trannies out there for ruining everything for us” — “You took our organizations. You took our pride festivals. You took our progress and reversed it. Now the right wing is coming after us because you had to use women’s restrooms and go after little boys with your puberty blockers. We are eternally grateful.”

6.22 thread titled “When did we decide that the word ‘progressive’ is synonymous with ‘insane?’”

“It used to be that progressives would champion causes like women’s suffrage, civil rights, ending discrimination against racial minorities and gays,

enacting laws to protect women and children against abuse.

“But today, it seems like the only things progressives care about are these psychotic, whacked out initiatives like designer pronouns, allowing transvestites into women’s restrooms, and transitioning little boys into little girls.

“So if you’re a man who wants to be a woman, you can take hormones, get breast implants, and have an operation to mangle your penis, and then you get to forcibly shame everyone else into pretending that you’re a woman?

“If you’re a dumb teenager who wants to feel special, you can adopt some stupid pronouns and then forcibly shame everyone else into pretending your invented gender is real?

“How is this progress?”

6.22 comment #2: “We let the trannys hijack not only LGB but also the democratic party. Though I am no longer a Dem, they are highly influential. Who wants to rise up and create a new party with me?”

6.22 comment #3: “‘So if you’re a man who wants to be a woman, you can take hormones, get breast implants, and have an operation to mangle your penis, and then you get to forcibly shame everyone else into pretending that you’re a woman?’

“No hun, they don’t do all of that stuff. They just grow their hair out and dye it purple, put on some nerd girl glasses, red lipstick and an unflattering dress. Voila— trans.” 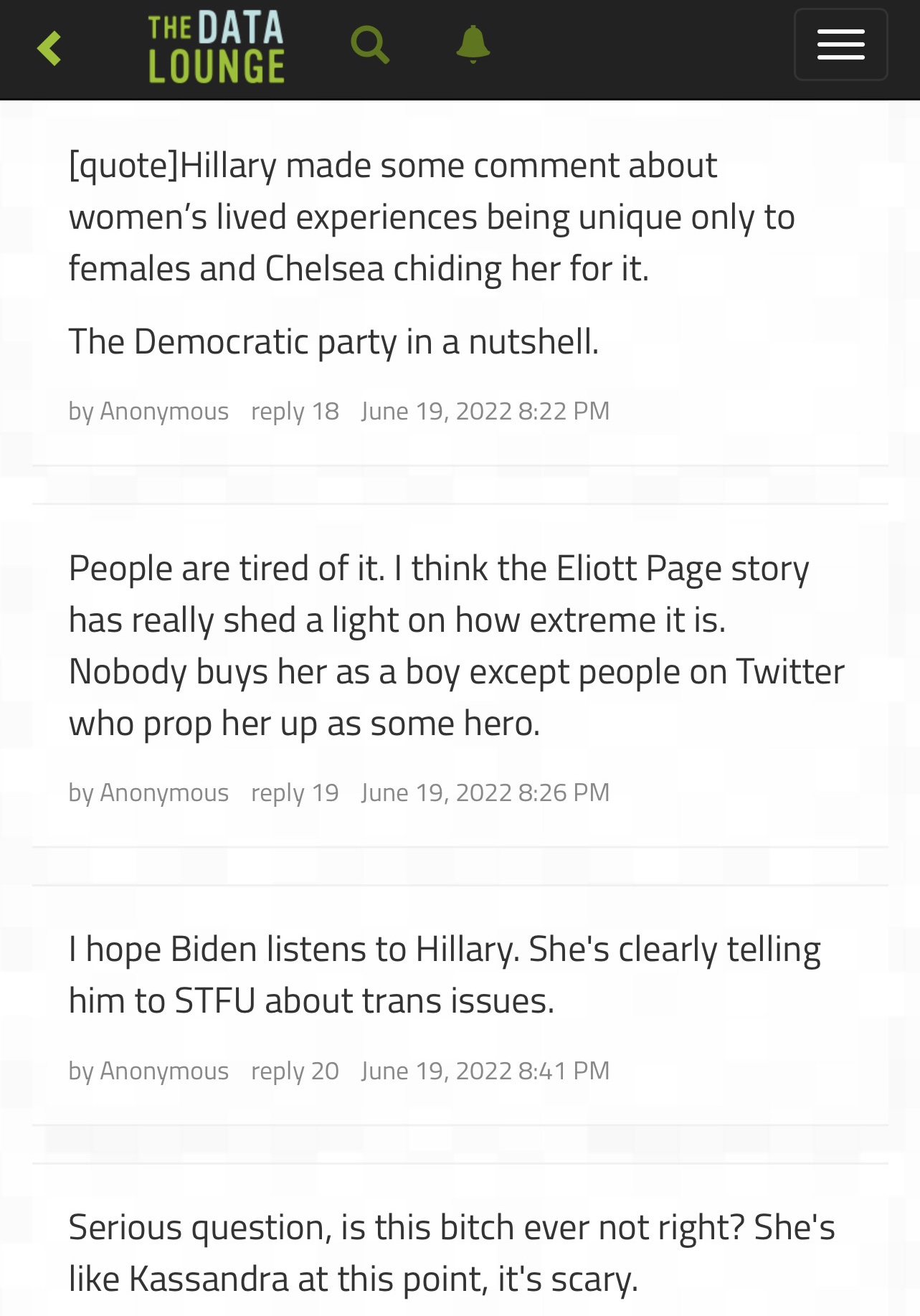 June 22, 2022by Jeffrey WellsNo Comments
« Previous post
The Hell Is This?
Next post »
This Is The Forest Primeval