This is old news to the graphic-novel community, but Rosario Dawson recited the basic promo drill the other day about “Occult Crimes Taskforce,” a just-published comic-book series in the vein of X Files and Men in Black (about “different creatures, different people and different things having to live with each other”) that’s about a new action-chick character (obviously the spittin’ image of Dawson) named Sophia Cruz. 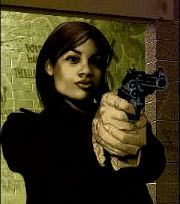 “OCT” arrived in comic-book stores (like West Hollywood’s Golden Apple) this month, and Dawson will be hitting Comic Con late next week or so to promote it. She said at the Clerks 2 junket on Tuesday that Cruz is a vulnerable lady-with- a-gun-and-badge in the tradition of Jodie Foster‘s Clarice Starling in The Silence of the Lambs. Naturally, a video game and a feature film version are in the works.