It was obvious within ten or fifteen minutes of watching The Mysteries of Pittsburgh what the central flaw is — it’s the way Art Bechstein, the lead character (and narrator), has been written, and particularly the aura of the actor who plays him — the almost 100% repellent Jon Foster. I paid to see Pittsburgh on Friday night at the AMC Empire, and I really can’t remember feeling such acute dislike for any non-villain character in so short a time. One result is that it was a serious struggle to force myself to watch the film to the end. 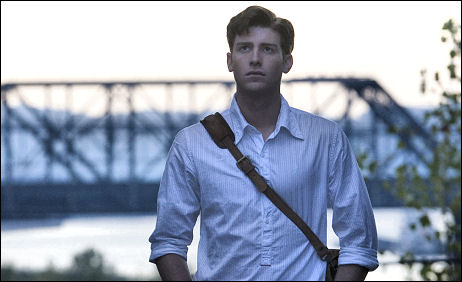 The problem is that time and again, Bechstein is shown to be a timid and inarticulate liar. His narration (said to be taken straight from Michael Chabon‘s 1989 best-seller) is wry, sharp and candid, but Bechstein is anything but. He’s a dull blob — a kind of bland sociopath — with a skinny frame and a face that is all about non-disclosure. This is not Bechstein from Chabon’s novel, which I remember reading in ’90 or thereabouts.

Foster stares glumly at his gangster father (Nick Nolte) and offers nothing but stupidly evasive half-replies to his questions. Out of boredom he has a hot-sex affair with his book-store boss (Mena Suvari) and treats her like dirt, and lies to her face, ineptly, when she accuses him of dissing her. He obviously hungers for Sienna Miller ‘s girlfriend-of-Peter Sarsgaard character but pushes it all down in spasms of suppression that lead nowhere. You just want to shoot him.

Foster conveys a single emotional condition throughout the entire film — a sense of quiet panic that people might actually be reading who and what he is (i.e., a cypher), and the absolute necessity of preventing this from happening. 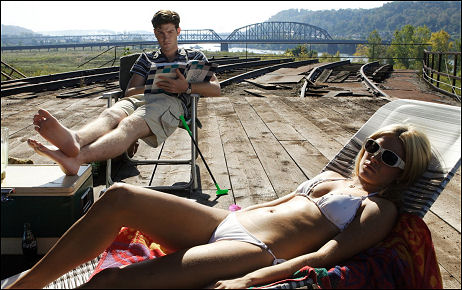 On top of which Foster is a bore on his own terms. He has good bones and is somewhat handsome (if you don’t have an aversion to people with red hair) but I’m having trouble remembering another actor who’s conveyed less of an inner life of any kind — less vigor, less aliveness, less wit or humor. His eyes are like little brown pebbles on the side of a road. He needs to be play villains. Pittsburgh director Rawson Marshall Thurber probably would have bored me without Foster in the lead role, but his decison to cast Foster was absolutely fatal.