I’ve long regaded Tom Wolfe as a political conservative, but I’ve never thought of him as an old-line racist. This is nonetheless the view of New Yorker critic David Denby in a new hardback essay he’s written called Snark. Here’s an excerpt from a review/summary/critque by reasononline’s Michael C. Moynihan. 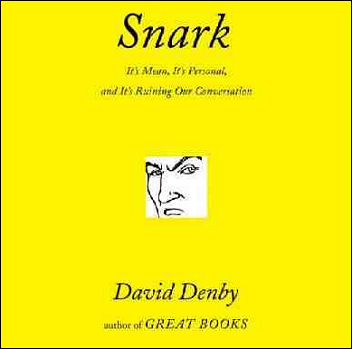 “Denby identifies Wolfe’s Radical Chic as a progenitor of today’s snarky style, but it fails, he says, because the writer’s teasing of haute-liberal infatuation with the Black Panthers ‘now seems more fatuous than the assembled partygoers,'” Moynihan writes. “How so? Because, according to Denby, ‘In the end, [Wolfe’s trademark] white suit may have been less an ironic joke than the heraldic uniform of a man born in Richmond, Virginia, who entertained fancies of a distinguished Old South in which blacks kept their mouths shut, a conservative who had never accustomed himself to the new money in the Northeast.’

“While denouncing bloggers for rumor-mongering and for besmirching reputations with nothing but conjecture, Denby nevertheless finds it appropriate to imply that Wolfe’s writing is steeped in white supremacy.”

“Anyone who has been exposed to the subliterate animosities and grudges of the cruder anonymous commenters or bloggers, or has bristled at the lowered bar of what passes as clever satire on snark-heavy websites, will have some sympathy for Denby’s effort to attack against the ‘everyone-sucks-but-me’ culture,” Moynihan notes. “But his bizarre choice of targets and imprecise definition of ‘snarky’ derails his argument from the beginning.

“At its core, Snark is a deeply political book and, therefore, Denby offers special dispensations for a Right On!-variety of ideological snark.

“‘Snark is irresistible,’ he writes, when discussing our previous president (and who could disagree with that?), but it apparently becomes gauche when directed at Democrats peddling hope and change. A large chunk of his argument is ceded to score-settling and a post-election outpouring of anger against those who said impolite things about Hillary Clinton and Barack Obama. (Denby may be the only writer alive who would describe Sarah Palin‘s description of Barack Obama as ‘palling around with terrorists’ as snarky.)

“Denby tags the Fox News screamer Bill O’Reilly as a boorish knuckle-dragger, but his liberal counterpart Keith Olbermann is something else entirely: ‘One can’t help but noticing…that Olbermann’s tirades are voluminously factual, astoundingly syntactical…and always logically organized.’ The leftist writer Gore Vidal is a ‘master of high snark,’ while his conservative counterpart Tom Wolfe is an overrated racist. If you agree with the snark, it probably isn’t snark.”