Death of a Filmmaker

It’s fully in keeping with my listless viewing habits that I’m only now interested in seeing La Vida Loca, a recent documentary about the Mara gangs in El Salvador, now that the film’s director, Christian Poveda, has been killed. The poor guy was reportedly found Wednesday in Tonacatepeque, a rural region north of San Salvador capital, with more than one bullet in the head.

Can you order La Vida Loca on Amazon? Of course not. And a site that has information about it has some kind of virus on it, according to my computer.

“La Vida Loca reflects a depressing and hopeless reality. The documentary, by photojournalist and filmmaker Christian Poveda, follows some of the members of ”la dieciocho,” the so-called 18th Street gang in a poor San Salvador neighborhood.

“‘Little One’ is a 19-year-old mother with an enormous ’18,’ reflecting her membership in the 18th Street gang, tattooed on her face. The numbers stretch from above her eyebrows down onto her cheeks.

“‘Moreno’ is a 25-year-old male member of the same gang who works in a local bakery set up by a nonprofit group called Homies Unidos. The bakery eventually folds when its owner is arrested and sentenced to 16 years in jail on homicide charges.

“And ‘Wizard,” another young mother and gang member, who lost her eye in a fight, is followed by Poveda during a long series of medical consultations and operations to fit her with a replacement glass eye. She’s shot and killed before the end of the film.

“Stories like that, punctuated with funerals attended by silent, heavily tattooed male gang members and wailing young wives, mothers and girlfriends, make up the sum of La Vida Loca.

“The nature of their existence meant that Poveda had to spread his camera lens wide in the 16 months he spent shooting the film. 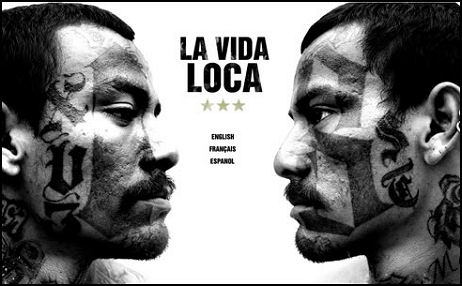 “‘I knew right from the start that I couldn’t film just one character,’ he explains during an interview on a trip to Mexico last month when La Vida Loca was part of the Guadalajara International Film Festival.

“‘Firstly, they get bored after a couple of months and don’t want to be filmed anymore. Or two, they get put in jail, or they get killed.'”

The mind seizes up trying to imagine the mentality of Proveda’s killers. They probably imagined that he was going to rat them out to authorities (or some equally brilliant deduction), or perhaps took offense as some meaningless thing he said or did.

This is my second cinematic exposure (in a sense) to El Salvador gangs, the first being Cary Fukunaga‘s Sin Nombre. The right-wing fantasy in my head right now is an army of 10,000 or so Creasy-like characters (i.e., the CIA guy played by Denzel Washington in Man on Fire) moving in on the gangs and just wiping them out, one by one. Their mothers and girlfriends would be upset, of course, but who else would be?