My impression from Todd McCarthy‘s review is that Werner Herzog‘s Bad Lieutenant: Port of Call New Orleans isn’t quite declarative enough in its (apparent) attempt to be a loonier-than-life psycho-detective drama. Star Nicolas Cage, he says, “is sometimes so over the top it’s funny, which one can hope was intentional.” And there’s the rub — McCarthy isn’t sure. And yet, he says, if Cage “was looking for a vehicle in which his hyper-emoting would be dramatically justifiable, he found one here.” 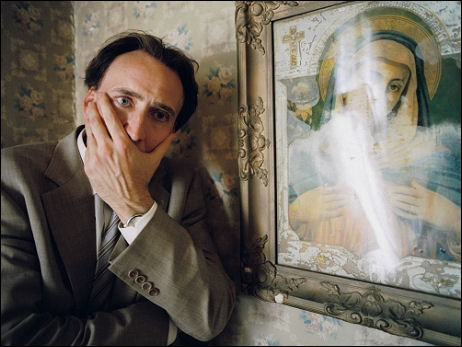 And yet, he says, “there’s also a sort of deadpan zaniness, stemming from a steadfast conviction in its own absurdity, that gives the film a strange distinction all its own. Herzog approaches the setting of New Orleans, as well as the depredations of the title character, with a straight face and unblinking lens, the better to catch a glimpse of the links connecting Katrina, the corruption of authority as seen through the outrageous behavior of the lieutenant, and the money, which lands mostly in the wrong places.

“If one watched this movie without knowing the identity of the director, it would admittedly be difficult to give it much credit, since it is so indifferently made, erratically acted and dramatically diffuse. For a considerable stretch, it remains unclear how one is to assess the helmer’s handling of vet TV crime writer William Finkelstein‘s pulpy scenario. The film is offbeat, silly, disarming and loopy all at the same time, and viewers will decide to ride with that or just give up on it, according to mood and disposition.”

I’m getting a feeling that Bad Lieutenant: Port of Call New Orleans isn’t one for the Eloi. I for one can’t wait to see it in Toronto. I wish I still got high because this definitely seems like thje kind of film that you need to smoke a bowl before seeing.