A friend asked me to suggest a nice PG-rated disco movie for her daughter’s 10th birthday party because (a) her daughter likes disco and (b) Saturday Night Fever is rated R and considered too adult by some of the parents of the girls coming to the party. I sent her an A.V. Club posting with with a piece called “Six Films That Helped Kill Disco,” and then I added the following: 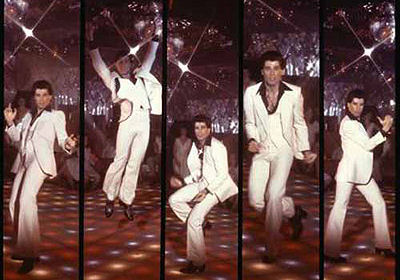 “Disco is bad for the soul — then, now, forever. You’re fine with [your daughter] and her friends revelling in the most soul-less and mechanistic mainstream music ever created in the history of civilization, but you want to shield her from semi-adult content at all costs. You’re basically telling her, ‘Empty plastic entertainment is fine, but anything that smacks of artful depictions of actual reality…well, that may not be appropriate.’
“My boys were into the worst TV garbage imaginable when they were 9 and 10 and 11 years old, but I always told them they were polluting their brains with that stuff and tried to get them to sample good movies every so often. And they finally grew out of their garbage phase. [Your daughter] is in a girlie-synthetic phase now. That’s what being ten is about (i.e., early tweener) but you’re doing her no favors by facilitating a disco party.
“My basic point is that there are things that are far, far worse than honest ‘adult content,’ and disco music is certainly one of them.”
While writing this I was playing the Who’s Sister Disco in my head.