The subject turned the other day to movies that were barely seen when initially released, and will almost certainly never be seen by anyone on DVD and therefore never remembered by anyone, ever. Dead, buried, finito. And I came up with one — Saul Swimmer‘s The Black Pearl (1978), which you can’t find on VHS and never was issued on DVD. 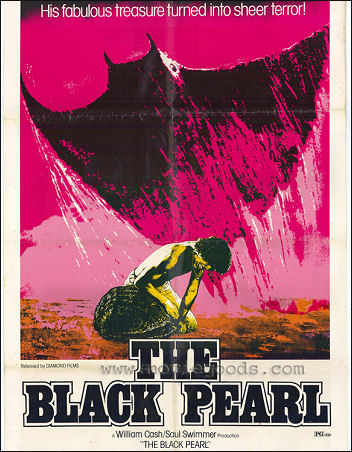 It starred Gilbert Roland, Carl Anderson and Mario Custodio , and was basically about a hunt for a large black pearl located off the Baja California coast. The money scene was about the young hero having to grapple with a giant manta ray that guards the treasure.
The reason I remember The Black Pearl is not because I liked it all that much. It’s because I was close with a lady who lived on West 13th Street named Elaine who told me something about a certain producer of The Black Pearl — he was young so maybe he was just an associate producer — that has always stayed in my mind. And only now, nearly 30 years after the fact, can the story finally be told.
Elaine and I were boyfriend-girlfriend for as little less than a year, sometime between mid ’78 and early to mid ’79. We remained semi-friendly after we broke up, and she told me one night that she was going out with a guy named something Harris, who’d produced or co-produced The Black Pearl. I’d seen her having a drink with him at the Village Bistro — nice looking, dark hair, nice sweater — and asked her a day or two later if he was a nice guy and she said yes, etc.
And then somehow I managed to get her to tell me how their first night of amour had gone, and she told me that they’d hardly slept at all due to his having made love to her eight times from midnight to the crack of dawn. Wow, I said, and let it go at that. And yet deep down I was impressed. A night of typical grand passion might include three or four go-rounds, but eight? Harris was either very athletic or very full of feeling, or a combination of the two.
The take-away thing is that Elaine got a little bit angry with me the next time we spoke because — I was actually being respectful in a roundabout way — I referred to the Black Pearl producer as “Eight Times Harris.” She was actually more like half-pissed and half-laughing. But that “Eight Times Harris” remark is the reason I still remember The Black Pearl.
And now there are a few more in the world who will forever remember this film. Right? If I hadn’t written this The Black Pearl would be the same dead movie it’s been for the last 28 or 29 years, but now there’s something to remember it by. Am I right or wrong?