On 8.4 Scott Brown‘s Vulture interview with screenwriter Damon Lindelof appeared. The gist was obvious — robot-zombie Hollywood is bingeing on destruction porn, and in so doing is eating its own tail. I read Brown’s article and went “yeah….so?” I’ve been saying this for years. Strafe the ComicCon faithful in an F4 Phantom jet. The more CG apes and comic-book geeks you can eliminate, the better. The 80-minute finale of Man of Steel was, I suspect, the straw that broke the camel’s back for many of us. It’s gone too far. It’s moderately interesting to hear Lindelof, one of the leading whore-architects of this trend, admit that self-destruction is inevitable but…aahh, I wasn’t excited enough to link to it. But I came back to it today and decided that Lindelof’s quotes are so well-phrased that they deserve a re-reading. 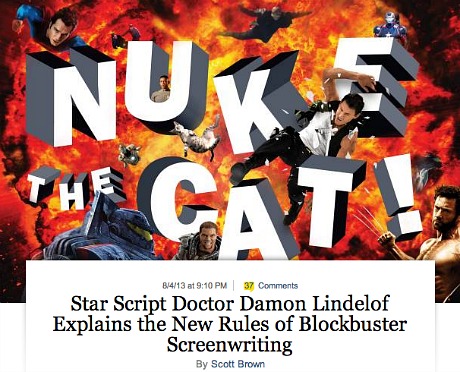 “That escalation,” Brown writes, “can be felt across the entire film industry this summer, a season of unparalleled massiveness: more blockbusters released, more digital demolition per square foot, and more at stake than ever. The first tentpoles out of the gate did breakneck business, but a late run of expensive flops (and even respectable also-rans) has industry watchers reexamining Steven Spielberg’s prediction, in June, that Hollywood is headed for an ‘implosion’: An industry that makes only megamovies, prophesied the father of the megamovie, will die of its own gigantism.

“But Hollywood’s gigantism, Lindelof points out, is practically algorithmic — and the effect tendrils all the way down to the storytelling level. When ever-larger sums are spent to make and market ever-fewer, ever-bigger movies, and those movies are aimed at Imax screens, then world-­shattering comic-book I.P. and gigantic special effects are expected, with larger-than-life characters wielding those effects. No one necessarily asks for it; it just kind of happens. It’s what Lindelof calls Story Gravity, and dealing with it — whether that means resisting it or simply surfing it skillfully — is the great challenge of writing this new breed of tentpole blockbuster. The question used to be: How do we top ourselves? The new one seems to be: How do we stop ourselves?”