Yesterday I re-read a nearly six year-old piece I wrote on the day after Marlon Brando died (i.e., 7.2.04), and I really enjoyed some of it so I’m re-posting apropos of nothing. Well, something. I was researching yesterday’s Oscar death-tribute item that touched upon a decision not to to run a special tribute to Brando during the February ’05 telecast, and I happened upon it. 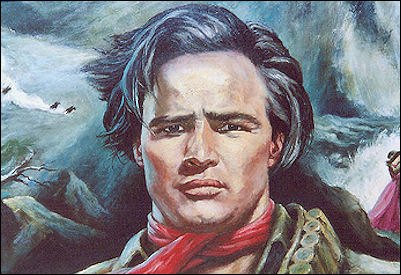 “We all knew death wasn’t too far off for Marlon Brando, what with his age (80) and his weight issues and all, but the news of his passing on Thursday night carries more than just sadness,” I wrote. “A guy I used to really and truly love is gone, and all kinds of backwash is starting to pour in.

“It’s hardly unique to say that my feelings about Brando will always be split between what he didn’t do when he got older along with the glories achieved during his phenomenal prime. Almost everything I’ve ever heard about the guy testified to his having been a tangle and never a day at the beach, but his obstinacies always seemed to pale when measured against the his once undeniable genius.

“The transcendent beauty of his acting in On The Waterfront, Viva Zapata, Julius Ceasar (his delivery of Marc Antony’s “cry havoc and let slip the dogs of war” speech is jolting, electrifying), A Streectar Named Desire, The Men…and then that brief one-two in the early ’70s with The Godfather and Last Tango in Paris…no one will ever forget his greatness. It will always burn through.

“Since starting this column in ’98 I’ve written more than once about how Brando had become a sad paragon of rot, ruin and failed potential. He became this (or gave in to the syndrome) over the last 25 years or so. In my mind, the beginning of the sag started with Guys and Dolls. The deeper degeneration period kicked in with Superman in ’78. When I think of the metaphor of that white wig he wore…

“Marlon should have tried harder, gone back to the theatre, eaten a lot less ice cream, directed more films (I’ve always loved One-Eyed Jacks, and I’ve always regretted that a remnant of the much longer and more experimental Jacks he originally shot had been saved somewhere), avoided being a recluse, hung with more people, gone back to school, worked out more, been a better dad….the things he seemed to do wrong! Endless! 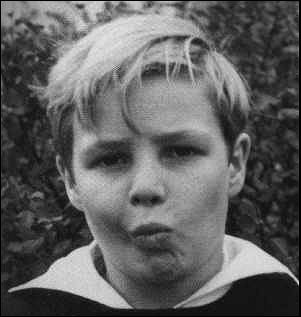 “He got rolling as a New York actor in ’44 and had a ten-year run (until ’54) when he could do no wrong… then he got caught in the muck of Hollywood and was in and out (mostly out) for the next 16 or 17 years. He restored himself with The Godfather and Last Tango, and then he began to spiral down again. He never again caught serious heat or wind.

“In short, he was in a state of becoming for his first 20 years, an absolute God for 10 years, and a guy grappling with more than his share of disappointments, frustrations and pain for most of the other 50.

“I remember reading somewhere that his using the word ‘wow’ in On The Waterfront was one of the most revolutionary improvs ever spoken in the 1950s. Up to that point ‘wow’ was something you said when you sat on a blanket and watched the 4th of July fireworks. But Brando’s ‘wow,’ spoken to Rod Steiger‘s Charlie character after he pulls out a gun and threatens Brando’s Terry Malloy, his brother, was all about sadness… a stunned and wounded lament.

“There’s also that moment when Charlie urges Terry to join him inside a bar, and Terry, wanting to be alone with his feelings of grief for a friend named Joey who’s just been killed for squealing to the authorities about the waterfront rackets, begs off. I don’t know how Malloy’s reply actually reads in Budd Schulberg‘s script, but all Brando says to Steiger is, ‘Well, I’ll be around….’ and then the rest trails off. The acting is in the incompletion. It’s masterful.”