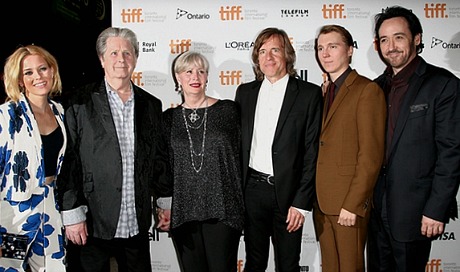 When Showbiz 411‘s Roger Freidman called it a flop in a 6.26 column, I asked Roadside spokesperson David Pollick for a response. “Love & Mercy is an indie hit,” he claimed 10 days ago. It doesn’t really feel that way to me. It feels like a mezzo-mezzo that’s winding down, and it really breaks my heart to say that.

After all the fervor that began at last September’s Toronto Film Festival and which re-charged in the weeks before Love & Mercy‘s early June debut, it’s very dispiriting to see this labor of love deflate like a party balloon. Here’s hoping for that end-of-the-year bounce I spoke of.

Pollick responds:  “$10.5 million is usually cause for celebration for indie films, not the death knell. The movie will cross $11M this coming weekend. And the 440 theaters that continue to play the film dropped just 23% from last week. Keep the faith, man, you’ve been our biggest proponent!”
DP

Incidentally: Here‘s a nifty instrumental track for “Let Him Run Wild” that I discovered a week ago.