In the 7.21 New Yorker, there are two familiar but distinctively shaped impressions of The Dark Knight from critic David Denby — awed praise for the performance of Heath Ledger, and another lament (the fourth so far from a cultivated dead-tree critic) about feeling throttled and numbed-down into a state that of confusion and lethargy. I thnk it’s fair to say at this juncture that Dark Knight contrarians are now officially a mini-movement — Denby, Edelstein, Ansen and Thompson. 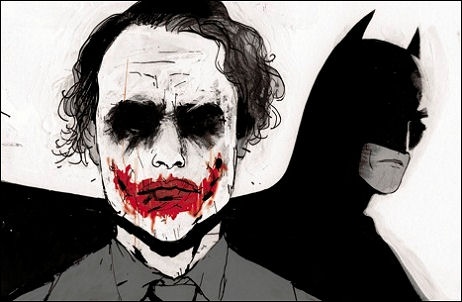 “The great Ledger…shambles and slides into a room, bending his knees and twisting his neck and suddenly surging into someone’s face like a deep-sea creature coming up for air. Ledger has a fright wig of ragged hair; thick, running gobs of white makeup; scarlet lips; and dark-shadowed eyes. He’s part freaky clown, part Alice Cooper the morning after, and all actor. He’s mesmerizing in every scene. His voice is not sludgy and slow, as it was in Brokeback Mountain. It’s a little higher and faster, but with odd, devastating pauses and saturnine shades of mockery.
“At times, I was reminded of Marlon Brando at his most feline and insinuating. When Ledger wields a knife, he is thoroughly terrifying (do not, despite the PG-13 rating, bring the children), and, as you’re watching him, you can’t help wondering — in a response that admittedly lies outside film criticism — how badly he messed himself up in order to play the role this way. His performance is a heroic, unsettling final act: this young actor looked into the abyss.
And here’s the scolding downer stuff…
“Many things go boom [in The Dark Knight}. Cars explode, jails and hospitals are blown up, bombs are put in people’s mouths and sewn into their stomachs. There’s a chase scene in which cars pile up and climb over other cars, and a truck gets lassoed by Batman (his one neat trick) and tumbles through the air like a diver doing a back flip. Men crash through windows of glass-walled office buildings, and there are many fights that employ the devastating martial-arts system known as the Keysi Fighting Method.
“Christian Bale, who plays Bruce Wayne (and Batman), spent months training under the masters of the ferocious and delicate K.F.M. Unfortunately, I can’t tell you a thing about it, because the combat is photographed close up, in semidarkness, and cut at the speed of a fifteen-second commercial. Instead of enjoying the formalized beauty of a fighting discipline, we see a lot of flailing movement and bodies hitting the floor like grain sacks. 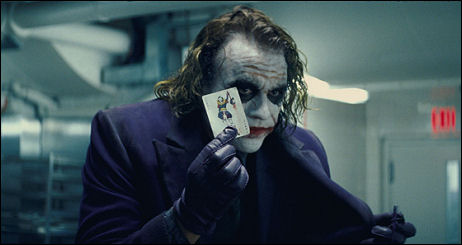 “All this ruckus is accompanied by pounding thuds on the soundtrack, with two veteran Hollywood composers (Hans Zimmer and James Newton Howard) providing additional bass-heavy stomps in every scene, even when nothing is going on. At times, the movie sounds like two excited mattresses making love in an echo chamber. In brief, Warner Bros. has continued to drain the poetry, fantasy, and comedy out of Tim Burton’s original conception for “Batman” (1989), completing the job of coarsening the material into hyperviolent summer action spectacle.
In other words, Denby “can’t rate The Dark Knight as an outstanding piece of craftsmanship. Batman Begins was grim and methodical, and this movie is grim and jammed together. The narrative isn’t shaped coherently to bring out contrasts and build toward a satisfying climax. The Dark Knight is constant climax; it’s always in a frenzy, and it goes on forever.
“Nothing is prepared for, and people show up and disappear without explanation; characters are eliminated with a casual nod. There are episodes that are expensively meaningless (a Hong Kong vignette, for instance), while crucial scenes are truncated at their most interesting point — such as the moment in which the disfigured Joker confronts a newly disfigured Harvey Dent (a visual sick joke) and turns him into a vicious killer. The thunderous violence and the music jack the audience up. But all that screw-tightening tension isn’t necessarily fun.
“The Dark Knight has been made in a time of terror, but it’s not fighting terror; it’s embracing and unleashing it — while making sure, with proper calculation, to set up the next installment of the corporate franchise.”
This last graph sounds like it came from the same well as that rant I published last Tuesday (“Boom Fart, Whee! and Splat”), to wit: “The world is collapsing, descending into chaos, destroying itself with tribal warfare and asphyxiating itself with fossil fuels. And in a certain spiritual way, corporate Hollywood product is a part of this implosion/self destruction.”