Democratic political consultant and former West Wing writer Lawrence O’Donnell has tapped out a short play about how things could go at the Democratic Party convention in August could go if there’s still a close contest going on between Hillary and Barack. Which won’t be the case, of course. It’ll be over sometime in early to mid June. But it’s good writing. It reminds me of the tone of Gore Vidal‘s The Best Man. The only it doesn’t have are lines like “there are no ends — only means.” 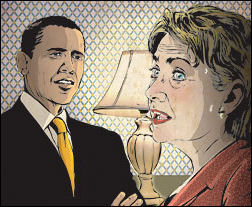