“While researching an upcoming piece on the films of 1968, Variety‘s Todd McCarthy “noticed that The Green Berets was the 10th highest grossing picture of the year, and it struck me that this was very likely the last film about a contemporaneous war that actually made money. So no wonder all those Iraq movies are bombs.” 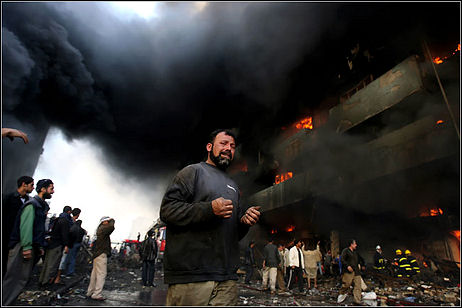 Which suggests…what, that a Green Berets-styled Iraq War film might succeed where others have failed? That if some director were to invent an optimistic fiction that had U.S. forces winning with someone like the Duke leading the charge, it might do some business? I wonder. I don’t think there’s a place for John Wayne in Iraq today any more than there’s a place for George S. Patton or Sgt. York or General Robert E. Lee. The only old-school guy who might fit into Iraq would be Steve McQueen‘s hard-assed loner character in Hell Is For Heroes.
There was no place for the Duke in Vietnam, really. Not in any straightforward heroic way. Oliver Stone, who was there, certainly didn’t think so. If anything, the Duke’s descendant in Platoon was the Tom Berenger character — the surly scarface who drank and looked down on the pot-smokers and wound up fragging Willem Dafoe‘s Jesus-like Sgt. Elias.
People seem determined to blow off any movie that has anything to do with Iraq. In my dreams I like to think that Average Joes might respond to (a) an old-fashioned 70mm Iraq War film — one that strictly prohibits cell-phone or handheld video footage, and goes instead for a 21st Century Apocalypse Now effect with Vittorio Storaro-level cinematography; and (b) one that delivers the excitement and intensity without the liberal finger-pointing about how we’re poisoning our souls over there. (Which is absolutely the case.) Something as good and jolting as the last third of Full Metal Jacket, say.
I only know that shitty-looking pixellated videos are over as far as Iraq War depictions are concerned. The cliche has been ground into the dust, and the only way to go now is to make that war look totally blue-chip, which is to say horribly and grotesquely “pretty.” Kathryn Bigelow and Paul Greengrass, take note!