There’s no question that certain currents in my life have been neurotic or obsessive. Perhaps the strongest neurotic theme has been a lifelong tendency (and I mean going back to my early childhood) to feel greater emotional attachments to movies and movie stars than to my own family members. Aside from my mother, whom I loved start to finish, I’ve always thought of my family relationships as unremarkable, and at times trying and downish. Certainly when it came to my father, brother and sister.

I first realized this when my father, with whom I had a conflicted relationship, passed in June 2008. (Here’s what I wrote the next day.) I realized then and there that I felt much sadder after the passing of Cary Grant, whom I’d long regarded as a kind of family member in a sense. I choked up when I heard about Grant’s passing on 11.29.86, and I remember feeling a pall in my soul for a day or two after. All my life he’d been my pal, my debonair uncle, my role model, a guy I’d always admired. 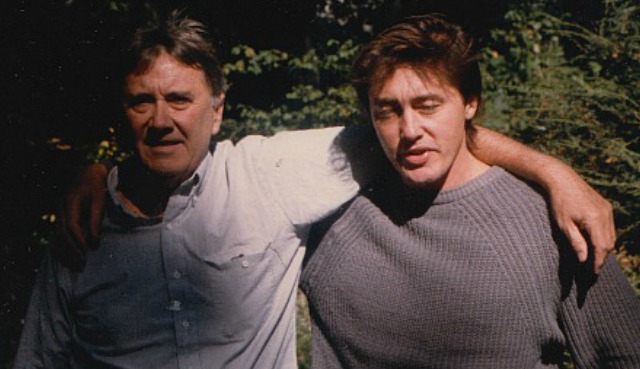 Snapped outside my parents’ home in Wilton, Connecticut, sometime around ’85.

Off-screen Grant was no day at the beach. I’d read that he could be a mood-swinger and a neurotic prick on a certain level, but that wouldn’t have dimmed my feelings if I’d tasted this first-hand. I felt a blood bond with the guy.

But when I heard about my dad’s death 22 years later (on 6.20.08) I felt…well, not a great deal. A little misty but only that. I felt relief for the poor guy, as he’d been seriously unhappy with the deteriorating quality of his life over the previous two or three years. And I felt a bit glum, of course, about his testy, often crabby manner when I was a kid, and how he’d inspired me to join Al Anon in the mid ’90s, but also how he’d inspired me to take a crack at writing and, later on, to embrace sobriety. Jim Wells was a fine, honorable fellow whom I admired and respected when I began to find myself in my mid 20s, but Cary Grant was kin.

I managed to shake Grant’s hand in early ’84 during an Academy after-party for George Stevens: A Filmmaker’s Journey. Too many people were crowding around so a couple of pleasantries was the sum of our exchange. There was so much I could’ve said and shared.

I’m an odd duck and I know it, and my weirdnesses are my own. I’m presuming that few out there have felt a greater emotional alliance with this or that actor or musician or politician, even, than he/she felt for someone of their own blood or tribe. But if anyone has, please share.

December 2, 2017by Jeffrey Wells19 Comments
« Previous post
Quirky Calls From Eccentric LAFCA Foodies
Next post »
Not That Hip But…