You could call George Gallo‘s Middle Men a kind of crime comedy except it isn’t funny — Giovanni Ribisi‘s hyper performance kills any instinct you might have to laugh at anything in this film — so I don’t know what to call it. I know that after it was over it felt sublime not to be in the presence of actors shouting and sweating and doing lines and smoking and screaming at each other and waving guns around. God! 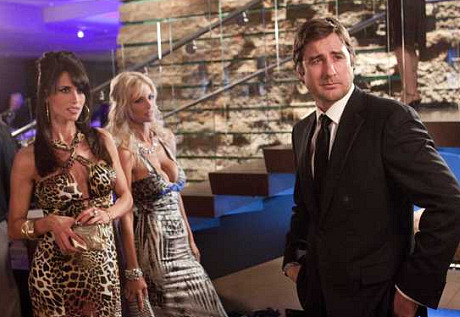 Middle Men is kinda like Goodfellas but with the emphasis lever turned all the way up, and despite agreeable performances from Luke Wilson, James Caan and Kevin Pollak, this is the central problem. It’s too cranked up. Which, in my book, means it’s all about the less well-known cast members (i.e., everyone who isn’t Wilson, Caan and Pollak) “acting” instead of being. Which gives you a headache after a while.

In all walks of life people of any intelligence usually dial themselves down. Whatever people are feeling or seeking or angry about or whatever, they’ll always turn their 9 or 10 feelings down to 4 or 5 or 6 at the highest. The only people who don’t understand that calm or restrained behavior will always work better than fierce emotionalism are idiots or druggies or people with thyroid issues, and who wants to spend 110 minutes with that kind?

What’s interesting, of course, is that while real-life people usually dial it down, the facts about who and what they are eventually leak out in little ways, and that’s what gives you the willies — those “tells,” those unintentional secretions of truth.

This sort of thing is a lot more subtle, of course, than some hyper, bearded, drugged-out, cigarette-smoking monkey screaming and spraying saliva as he pokes the hero in the chest and blows smoke in his face and whatnot. But in the eyes of under-talented filmmakers, this kind of thing is more appealing from a cinematic standpoint than the dialed-down behavior I’ve just described. There’s a place for shouting and screaming, but if you do it too much the audience will shut down. And that’s what happens when you’re watching Middle Men. You start saying “lemme outta here.”

It’s mainly Ribisi’s fault. Giovanni effin’ Ribisi. He’s so over-the-top in this thing that I don’t think I want to see him in any kind of film for the next four or five years. Really. I’m going to start make a list of all the films he’s and start figuring out excuses for not seeing them. 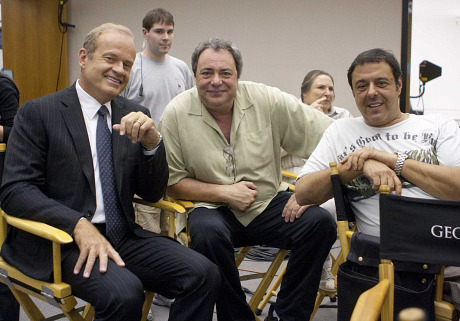 Ribisi’s performance is mainly Gallo’s fault, of course. It’s the job of a director to rein the actors in and guide them toward that sweet spot, and Gallo, clearly, hasn’t a clue about how much is enough or too much. I have to figure that Gallo, a somewhat older guy, didn’t want Middle Men to look like it was directed by some decrepit, over-the-hill dude who doesn’t understand the pace of 21st Century cinema and how to reach the ADD crowd by always keeping things cranked, so he decided to turn it on and turn it up and pile on the narration, etc. Some critic said the only thing Middle Men doesn’t have in this respect are pop-up ads.

Look at the above photo of Gallo (center) and Middle Men producer Christopher Mallick, whose actual history with an internet porn-billing service in the ’90s is the basis of the story. Do they not look like waste management guys from North Jersey? They could be sitting around Satriale’s and talking about loan-sharking with Paulie Walnuts. More to the point, they could be associates of Christopher Moltisanti during the making of Cleaver. One look and you know they’re not X-factor types on the level of Martin Scorsese and Paul Schrader. Fuhgedaboutit.