Somebody in Criterion’s editorial department has published a q & a with producer Curtis Tsui, the subject being Tsui’s recent work on Criterion’s upcoming Paths of Glory Bluray. The project led Tsui to visit the rural English home of the late Stanley Kubrick, the film’s director. Tsui is “annoyingly coy” (his own words) when asked to physically describe the house and grounds, but by mentioning an annual three-day arts festival thrown on the estate by Kubrick’s widow Christiane, he provides the geographical location. 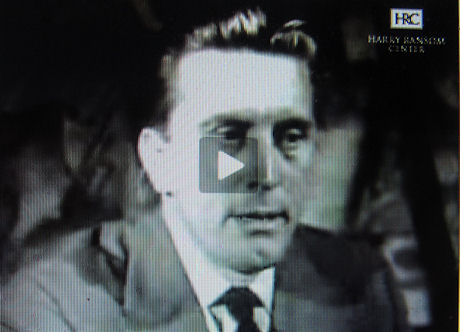 I’ve known for decades that Kubrick’s home was near the town of St. Albans, about 22 miles north of London. The website for the Childwickbury Arts Festival provides a map with an icon pinpointing the approximate spot. But when you paste the address — Childwickbury House, St. Albans, Hertfordshire, AL3 6JX, England — into Google Maps, you get a slightly different location to the south.

Tsui mentions a video clip of a November 1957 interview between Mike Wallace and Paths of Glory producer-star Kirk Douglas that he wanted to include on the disc. He couldn’t manage this (“the piece was impossible to land,” he says) but there’s a link to a University of Texas at Austin website that hosts the video. Tsui calls the interview kind of “mind-blowing,” explaining that “the types of questions that Wallace tosses out would catch almost anyone off guard and would never be allowed by a protective publicist today, and it’s really pretty stunning to see Douglas thinking on his feet and parrying those blows like a total pro.”

If you want mind-blowing, consider this quote from Wallace’s introduction: “Just the day before our interview, Mr. Douglas had completed shooting on The Vikings for which he had grown his hair long and he hadn’t yet had the chance to see his barber.” In other words Wallace is not only mindful of the regimented, bordering-on-military approach to men’s hair styles in 1957, but feels a need to actually prepare the audience for the shock of seeing Douglas’s coif, which is maybe a tiny bit longer and fuller than an average haircut worn by a typical Man in a Gray Flannel Suit. Lockstep conformity was the rule among urban male professionals of the ’50s, but Wallace’s remark borders on the absurd.

The other half-comical aspect is a pitch for Phillip Morris cigarettes that Wallace delivers before doing the Douglas interview: