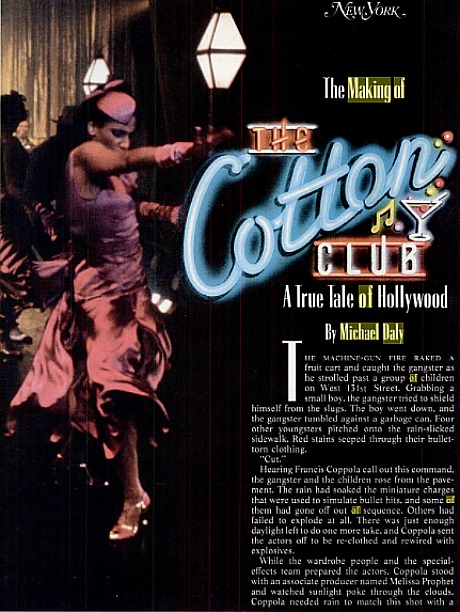 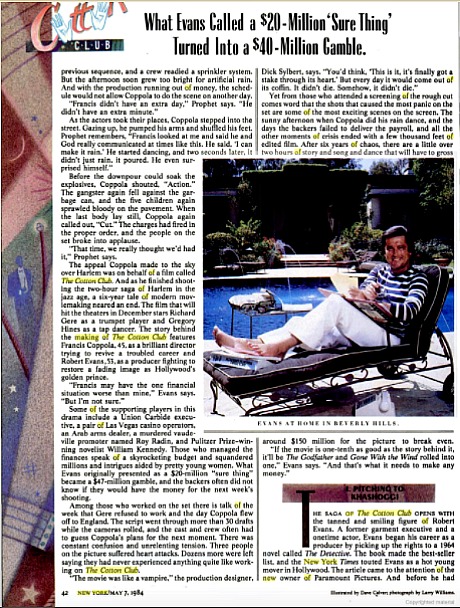 Wiki summary: Inspired to make The Cotton Club by a picture-book history of the famous nightclub by James Haskins, Robert Evans was the film’s original producer and also wanted to direct. He hired William Kennedy and Francis Ford Coppola to re-write Mario Puzo‘s story and screenplay. Evans eventually decided that he did not want to direct the film and asked Coppola at the last minute.

“Production designer Richard Sylbert claimed that he told Evans not to hire Coppola because ‘he resents being in the commercial, narrative, Hollywood movie business’. Coppola claimed that he had letters from Sylbert that ask him to work on the film because Evans was crazy. The director also said that ‘Evans set the tone for the level of extravagance long before I got there’. 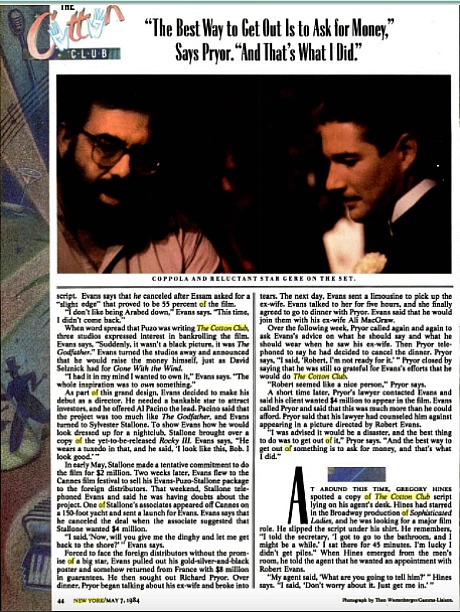 “Coppola accepted the jobs as screenwriter and then director because he needed the money – he was deeply in debt from making One from the Heart with his own money.
By the time Evans decided not to direct and brought in Coppola, at least $13 million had already been committed. Las Vegas casino owners Edward and Fred Doumani put $30 million into the film. Other financial backers included Arab arms dealer Adnan Khashoggi and vaudeville promoter Roy Radin, who was eventually murdered.

“According to William Kennedy in an interview with Vanity Fair, the budget of the film was $47 million. However, Coppola told the head of Gaumont, Europe’s largest distribution and production company, that he thought the film might cost $65 million.

“According to Splitsider, Richard Pryor was considered for the role of Sandman Williams. Robert Evans wanted to cast his friend Alain Delon in a two-scene role as Lucky Luciano but this did not eventuate. The role of Luciano was instead portrayed by Joe Dallesandro, starting the dramatic film career for the former Warhol superstar.

“Author Mario Puzo was the original screenwriter and was eventually replaced by William Kennedy, who wrote a rehearsal script in eight days which the cast used for three weeks prior to shooting. According to actor Gregory Hines, a three-hour film was shot during rehearsals.

“On June 7, 1984, Victor L. Sayyah filed a lawsuit against the Doumani brothers, their lawyer David Hurwitz, Evans and Orion Pictures for fraud and breach of contract. Sayyah invested $5 million and claimed that he had little chance of recouping his money because the budget escalated from $25 to $58 million. He accused the Doumanis of forcing out Evans and that an Orion loan to the film of $15 million unnecessarily increased the budget. Evans, in turn, sued Edward Doumani to keep from acting as general partner on the film.”