Difference Between Fake-Out and Fake-In

As I pointed out in a 7.15 post titled “Bourdain Deepfake Isn’t A Problem,” Neville’s alleged offense involved the audible creation of sentences (i.e., three) not actually spoken by Bourdain but written by him. Neville created an A.I. replication of Bourdain’s voice, assembled from vowel and consonant splices and fragments of legit Bourdain recordings. And so we hear Bourdain “reading” the passages even though he didn’t actually do that. 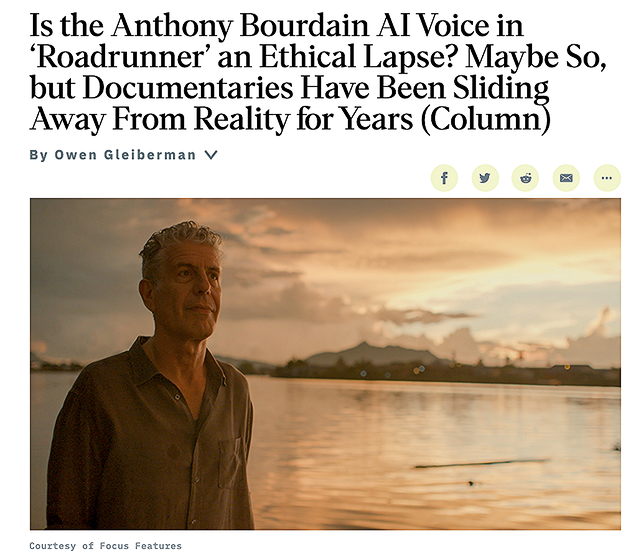 Gleiberman believes that Neville should have copped to the fakery somewhere in the film (probably in the closing credits), but otherwise isn’t that rattled. His basic point is that “when it comes to swapping in fake reality, documentaries have been sliding down a slippery slope for years,” especially in the area of reenactments.

“A reenactment and a voice fake actually do different versions of the same thing,” he points out. “Both cement a reality in your mind — the image of something or the sound of something — that didn’t happen, at least not in the way it’s presented.”

Gleiberman also notes that the deepfake Bourdain voice “probably gets closer to reality than most reenactments do,” and that documentaries in which an actor will read a subject’s words, sometimes simulating their tone of voice, “isn’t much of a leap from what Roadrunner does.”

Shorter Gleiberman: “Not much of a hoo-hah here, fellas!”

Best passage: “The manipulation of Bourdain’s voice in Roadrunner seems to open a Pandora’s Box. What happens when unethical filmmakers employ such techniques? But let’s not pretend that we’ve been purists about it. Documentaries have been inching away from unalloyed reality for a long time. And it’s we in the audience who enable it. We’re the ones who like our reality sweetened, heightened, finessed until it looks just like a movie.”