I’ve always been intrigued by the idea of relationships between people from different countries and cultures, and what happens after they pair up and have to deal with basic choices and life situations that they may (and usually do) handle differently. And how the differences tend to shake out in different ways.

So today I want to talk with you about some differences between Russian and American women.

Their portraits: Both are 30-45 years old. Both live in a megalopolis (New York, Los Angeles, San Francisco, Moscow, Saint-Petersburg). Both have a good education and have developed their careers. 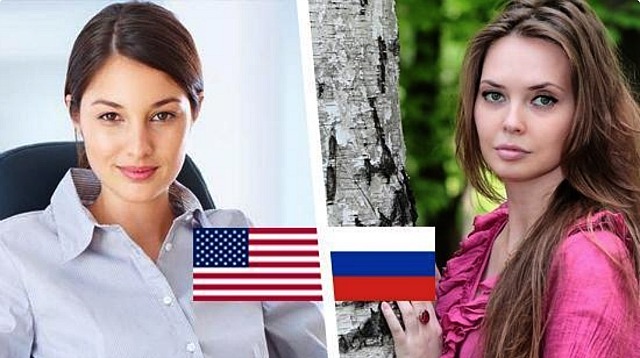 Russian women seem to pay more attention to their appearance: hair, makeup, clothing. As a result, they are perceived as more finely groomed.

American women don’t seem particularly concerned about how they look in everyday life. Ease and convenience seem to be more important to them. Hence unexceptional T-shirts, shorts, sneakers, minimal makeup or no makeup at all.

Personally, I once watched a disheveled American woman come to a beauty salon in pajamas and flip-flops. I can’t say that they are poorly dressed; in my opinion, just sad and somehow gray in general.

An American woman learns from a young age to position herself as a free person. Ownership of her own life is prized above all. Call it healthy selfishness.

Everything goes back to our childhoods.

As a child, I was always fighting with boys; I always fought back; I defended my honor, so to speak; it didn’t matter that I was bruised and taunted. “Tanya, well, you’re a girl! Give in to Sergey!” And the fact that Sergey pulled my hair, called me a bespectacled man, and then smeared pepper on my eyes…this was not much taken into account.

For an American woman, there is no division of household duties into male and female. American women rarely devote all their free time to washing, cleaning, or the art of cooking.

A Russian woman is ready to sacrifice their freedom for the sake of children and family’s well-being to a greater extent. Especially if the husband (partner) earns more and, accordingly, his financial contribution to the family is more significant. If you come home tired from work, you’re still expected to go to the kitchen to cook something for the family.

My mother was a promising medical student. She graduated from a nursing college (four years, all straight As). Then she met my father, whom she married. My sister was born in ’73. I came along the following year. Because of the family my mother sacrificed a potential career as a doctor. She believed it was her duty and maternal role. But my father continued to build his career path and we rarely saw him.

If an American woman is not satisfied with her husband for any reason, she quickly leaves, preferring not to waste time, but to move on with life. A Russian woman will patiently try to save her marriage for a while. Most often “for the sake of children”.

Another situation from my childhood: one day in kindergarten, we were all told to bring one of our favorite toys; the next day, all the girls showed up with dressed-up dolls and baby dolls; and the boys, of course, with cars, robots, and guns. I came with a stuffed bunny. Gender roles were clearly differentiated in our children’s minds even then.

A Russian man will say that slavic women are more feminine, affectionate and compliant by nature. Even the way they move and speak is softer.

American women are more willful, even strident. Many people notice their masculine behavior. When paying her a compliment, you should be extremely delicate and careful in your words. One careless word can be considered an insult.

What opinions about the differences do you have? Share with me please! I would be very curious to hear any opinion, especially from those who have personal experience with Russians.