I’d be lying through my teeth if I said everyone in the dysfunctional family known as New Line Cinema is sad or heartbroken over the departure of marketing president Russell Schwartz. A guy up to his neck in the mucky-muck called the news “great…a good thing for New Line.” A former New Line executive said everyone in the pipeline had known for months that Schwartz was a dead man, but when told of the actual axe-falling this afternoon he responded with an effusive “wow…it finally happened!”

Variety‘s Dave McNary wrote that Schwartz’s departure “did not come as a huge surprise…he’d been rumored to be on the way out since last year.”
Until Hairspray opened and made (as of last weekend )$78.9 million, New Line’s slate “had chalked up undistinguished box office results on such pics as Snakes on a Plane, The Nativity Story, The New World, Fracture, The Last Mimzy, Hoot, The Number 23, Tenacious D and the Pick of Destiny and Texas Chainsaw Mas– sacre: The Beginning,” McNary wrote. “During 2006, its top performing pic was Final Destination 3 with $55 million.”
Schwartz “is a very nice guy but he never had a clue about mass distribution,” said a marketing veteran. “He’s used to doing small art films…mass distribution is off his radar.”
The former New Line exec said “the marketing over there has been broken for a while, and the talk about Schwartz being on the way out has been happening for a good five or six months. They tried to hire a couple of people to replace [Schwartz] but they couldn’t make it work. There was talk at one time that he would partner up with someone and they’d both report to [New Line’s distribution/marketing president and COO] Rolf Mittweg, but no one wanted to come into that situation. 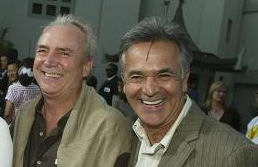 “The company was split” over the Schwartz situation, the former exec said. “[Production president] Toby Emmerich and his camp wanted to get rid of him, and Rolf and his gang wanted to protect him.
“They had raised expectations so high for Hairspray — they really thought it was a $200 million movie — and its failure to get there may be a part of what happened today. The failure of The Last Mimzy didn’t help. There were people who thought Schwartz should go after the failure of Snakes on a Plane. There were some who said he should be out the door after Nativity went south. The fact that they finally stepped up and did this means they’ve probably got somebody in the wings to take his place.”
Schwartz won’t actually leave the building until the end of August, according to Variety, but where does this leave New Line’s Shoot ‘Em Up , which opens on 9.7? Probably unaffected. Whatever happens box-office-wise, it’ll come into the market- place boosted or depleted by certain Schwartz decisions about this and that. Schwartz, after all, will be out the door only seven days before it opens, according to Variety.