Julie Delpy‘s 2 Days in Paris (Samuel Goldwyn, 8.10) is an above-average relationship meltdown film — part comedy, part “heart” movie, part Who’s Afraid of Virginia Wolff? (Okay, not that dark…but nearly.) It ends on a moderately hopeful note (i.e., one of resignation and acceptance), but nothing that smacks of pat or soothing. And for that alone it has my allegiance. 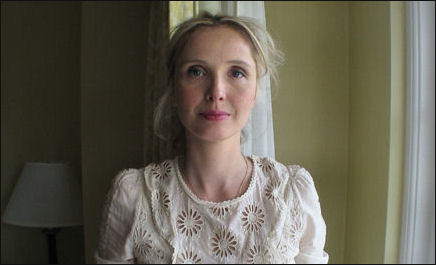 It’s about un-cute rancor between an American-born boyfriend (Adam Goldberg) and his French-born girlfriend (Delpy) as he gets to really know her during a brief stopover in Paris as he realizes she’s a lot more complicated than he figured, and that she’s got way too many ex-boyfriends, and that he’s lacking in that laid-back European cool that comes in handy when you’re grappling with ex-boyfriend jealousy. And that he really hates Paris, or more precisely Parisians.
I hated Paris the first time I visited way back when. I got so frustrated and angry with my inability to understand or recognize the necesssary nouns and verbs that I eventually freaked out and decided to pretend to be a deaf mute, or at least a guy with terminal laryngitis. I would go into restaurants and bakeries and point to my mouth and indicate my inability to say anything in any language. I would then point to this and that rather than ask for it pigeon French, which always led to trouble.
I’m explaining why I both liked and didn’t like Golberg’s performance. I related and didn’t relate. It wasn’t altogether comfortable or uncomfortable — it was in-between. Which is what I half-liked about it. I respect Delpy, finally, for not trying to make me like or love this film 100%.
Delpy directed, wrote, costars in and did the music for 2 Days in Paris. I spoke to her about it for about 20 minutes this afternoon. It was another one of my nothing- special interviews — at times stimulating, blah at times, an in-and-outer. But I fell in love with a photo I took of her, and so I’m happy with the whole thing. As I hope she is.