The day before flying to Boston (11.29) I wrote that while I was okay with Charlie Wilson’s War, I liked and admired Aaron Sorkin‘s 5.25.05 version of his Charlie Wilson’s War script somewhat more. I said it’s “obvious that the movie has been shaped in order to be less complex, much more upbeat and explicitly depoliticized, which to say scrubbed clean of all specific Al Qeada and 9.11 mentions.” 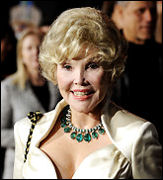 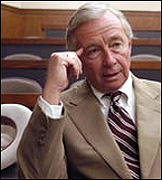 It appears now that the Sorkin’s script may have been defanged and deballed due to legal pressure brought upon War producers by Joanne Herring, the right-wing Houston socialite and millionaire played by Julia Roberts in the film.

Yesterday’s Rush & Molloy column (12.12) in the N.Y. Daily News quotes Herring as saying she “practically choked” when she read Sorkin’s original screenplay,” which “ended with a shot of the Pentagon in flames, implying that Herring and Wilson (played by Tom Hanks) had abetted Osama bin Laden and his Al Qaeda crew.

“Can you ever predict a war?” Herring says to Rush-Molloy. “The shelf life of a Stinger missile is five years. There’s no weapon we got them that can be used today.” [HE note: This is a witless smokescreen rebuttal as neither the movie not Sorkin’s screenplay states or implies that weaponry purchased for the Afghan Muhjadeen in the ’80s was used against the U.S. later on.]

Herring showed the script to Wilson and “we wept and wailed and gnashed our teeth,” Herring says. “Then they brought in some legal muscle — Dick DeGuerin, the celebrated hot-shot Houston attorney who got an accused Houston murderer off and also defended U.S. Rep. Tom DeLay on conspiracy and money laundering charges. “DeGuerin got the attention of Universal and the producers,” the story says, [and] Herring, was thereafter “assured that the script would be changed.”

The column says that Herring flew to last Monday’s L.A. premiere “with Houston pals, who included former Secretary of State James Baker…[and] to everyone’s great relief, she and Wilson liked what they saw on the screen.”

That’s because all the movie says now, boiled down, is that despite the effective efforts of Wilson and Herring in arming the Muhjadeen and thereby helping to defeat the Russian invaders, the U.S. “fucked up the end game” in Afghanistan because no one nurtured political or cultural ties with key regional players and combatants in the war’s aftermath.

The film includes a scene in which Wilson’s committee declines to fund the construction of a school, at which point Hanks/Wilson talks about how “we always go into these countries to change things [and then] we always leave…but the ball keeps bouncing.”

Sorkin’s script is much tougher and more explicit in explaining the particular U.S. errors and oversights from the time of the Russian withdrawal to 9.11.01. As much as I like the final version of the film myself, I wish Universal and director Mike Nichols had sidestepped Herring and DeGuerin and been more faitthful to Sorkin’s original work, which is to say more faithful to the reality of what really happened over there.