A few days ago I mentioned a passing interest in wanting to read the script of Down and Dirty Pictures, an adaptation of Peter Biskind‘s 2004 book about the indie movie heyday of the ’90s. A couple of days later a guy sent me a draft of it, written by Joshua James and Dean Craig, undated, 121 pages, based on a story by James and Ken Bowser. u

And I have to say the following: the movie, which PalmStar Pictures is going to shoot in September, may turn out well or not. But the script isn’t half bad. At the very least it has a certain bold, punchy recklessness. It’s a movie within a “movie” with lots of yelling, arguing, maneuvering, jousting. It breaks down the fourth wall with characters talking to the camera. I muttered the word “Fellini-eseque” to myself at one point. It also reminded me at times of American Splendor. And it’s pretty funny at times. Especially the Bingham stuff.
The script could use a little refinement. The tone is a little too belligerent. It needs some meditation, quiet, stillness. But it’s a lot better than I expected. Here’s page #1, page #2, page #3 and page #4.
It’s basically a series of scenes showing some famous indie players — Bingham Ray, Harvey Weinstein, Jeff Lipsky, Quentin Tarantino, David Dinerstein, Cassian Elwes, Robert Rodriguez, Jeff Katzenberg, Tony Safford, Amir Mailin, Scott Greenstein, Allison Anders, Kevin Smith, Tim Roth, John Schmidt, Linda Lichter — trying to out-do or out-finagle or out-bullshit each other. Arguing, sniping, boasting, bellowing, boasting, bitching, whining, moaning. It’s pretty much Biskind’s book — all the good parts, I mean — minus the narrative padding and commentary and windy perspective.
You know the story if you’ve read it. It’s about how indie films became cool and happening in the late ’80s and early ’90s, how some titles caught on or exploded commercially, how the corporate guys bought some of indie operations and their operators and slowly, gradually co-opted and corporatized the “movement,” as it were.
The best characters, for me, are Bingham and Harvey — partly because they’re the most outsized and bellicose. It begins and ends with Bingham. Lipsky, Ray’s former October Films partner, figures prominently. 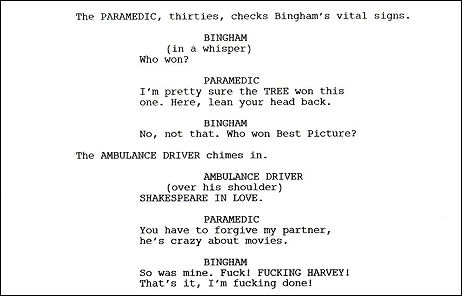 The problem, of course, is that the “characters” will be played by actors, which will probably feel strange. (To me, anyway.) The other obvious problem is that audiences haven’t exactly flocked to inside-the-beltway films about the film business.
I talked earlier today with PalmStar’s Kevin Frakes about the script and the shoot. He sounded like an intelligent, fair-minded guy. The film will not be “micro-budgeted,” he said, but will cost less than $15 million, he said. Name actors will we cast, he said. The shooting, which will happen during September and October, will shoot in Toronto (“Toronto for itself and Toronto for New York”), Park City and a couple of days in the South of France.
The very first copies of the revised script were sent to Harvey and Bingham, he said, right before the start of the WGA strike. Weinstein “told us to get somebody good to play me…that’s a quote,” he said. He didn’t share Ray’s reaction, whatever that was or is. Ray didn’t return my calls about the script. I also called Biskind — zip. My former boss Kevin Smith has yet to return also. Presumably they feel chagrined or rattled or at the very least guarded about it.
Something is telling me that Down and Dirty Pictures would work best as a six-hour HBO miniseries. The story covers a ten-year period and needs room to breathe. The PalmStar script is pretty good, but it feels a little too compressed.